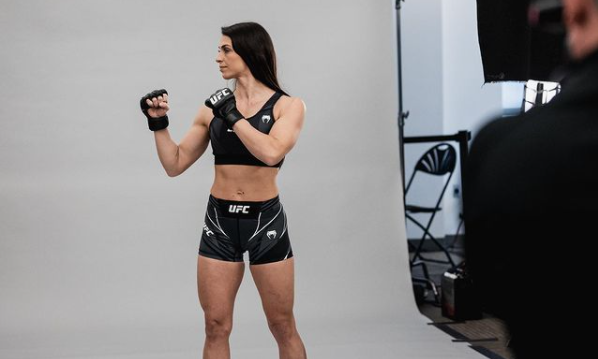 Jiu-jitsu ace Mackenzie Dern is tantalizingly close to a shot a the UFC strawweight title. On October 9, Dern will compete in her first-ever UFC main event, when she will take on the no. 6-ranked strawweight Marina Rodriguez. In a recent interview with MMA Junkie, Dern explained the weaknesses she sees in Rodriguez’s game and how she plans to exploit them.

“I think her ground game has a lot to work on,” Dern said. “I’ve seen her do a couple of elbows from the bottom, but more when the girl is just holding her on the ground. But I’ve seen her get up and giving her back, so I can imagine her camp is going to be a lot of takedown defense and maybe getting up using the cage to get up. I think her striking is so dangerous, but the ground has a lot to work on.”

Indeed, Rodriguez has shown to be one of the best strikers in the division. She is currently riding a two-fight win streak that includes a spectacular knockout of fellow strawweight contender Amanda Ribas. Dern, on the other hand, might be the best submission artist in women’s MMA. She is an ADCC champion and IBJJF gi and no-gi world champion.

After starting her UFC tenure on shaky ground after missing weight in her second promotional bout and losing to Ribas in her third, Dern has since put together an impressive four-fight win streak. Three of those wins came by way of first-round submission, and Dern predicts that same outcome against Rodriguez.