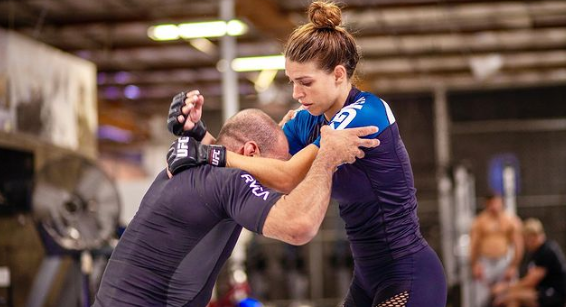 Ahead of her main event bout at UFC Vegas 61, Mackenzie Dern told the media that she expects herself to score submission wins each time out.

Mackenzie Dern has been two fights without earning a stoppage, and for her, that’s simply too long.

On Saturday, the BJJ standout will square off with fellow strawweight Yan Xionan in the main event of UFC Vegas 61, in a battle of the #5 versus #6-ranked contenders.

Speaking to the media on Wednesday, Dern touched on her development as a fighter. And while much of the focus remains on the grappler’s ever-improving striking, she hasn’t forgotten her roots as a world class submission artist.

Two fights ago, in October 2021, Dern fell short in her first UFC main event, losing a competitive decision to Marina Rodriguez. In April of this year, she bounced back with a split decision victory over veteran Tecia Torres.

In both of those contests, Dern had her opponent in terrible spots on the mat, but was unable to secure a submission.

She explained why that’s unacceptable:

“What I saw with Marina, what I felt with her, is I had really good moments on the ground and with all my credentials in jiu-jitsu… These girls shouldn’t be getting out of there alive. I mean not literally alive, but you know, with a win. If I get to the ground, I should be finishing…

“With Tecia, too, I had the kimura, toe hold, leg lock, I should be finishing that. Not doing a whole bunch of things and in the end you just didn’t do anything. I really trained hard to make sure that if I get to the ground I’m gonna finish this fight. So I’m confident. I think I’ll be able to get it to the ground and get the win.”

With a win, Dern will improve her overall UFC record to 8-2 and would once again find herself knocking on the door of a title shot. Current strawweight champion Carla Esparza will defend her title against Zhang Weili in November at UFC 281.

Dern is one of the best BJJ practitioners in the UFC across all divisions. An ADCC champion, IBJJF gi and no-gi world champion, as well as a two-time Pans champion, she holds notable grappling wins over Gabi Garcia, Bia Mesquita, and Michelle Nicolini, among others.

Dern’s opponent, Yan, comes into this fight on a two-bout losing streaking, suffering defeats to Esparza and Rodriguez.

How to watch: UFC Vegas 61 takes place on Saturday, October 1 and will air live on ESPN+ beginning at 4 PM ET.