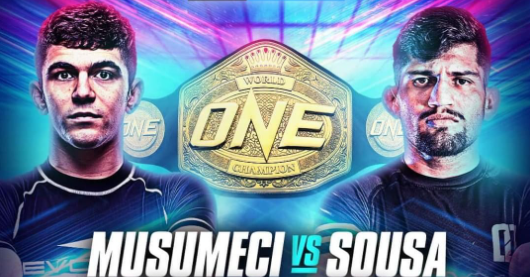 On Friday, September 30 at ONE on Prime Video 2, Mikey Musumeci and Cleber Sousa will square off for the first-ever ONE Championship submission grappling world title.

The two black belts share some history, going 1-1 against each other in a pair of gi matches in 2017; Sousa remains the last man to defeat Musumeci in the light feather weight class. Before Sousa and Musumeci face each other for the rubber match, let’s take a closer look at their history, their accomplishments, and how their showdown on September 30 could play out.

Both brown belt world champions, Musumeci and Sousa first met at the 2017 IBJJF Pans when they were relatively new black belts. In that match, the two competitors traded sweeps to even the score at 4-4 with Musumeci up an advantage going into the final 10 seconds. With just moment remaining in the contest, Sousa took top position after what appeared to be a double guard pull, giving him the advantage and tying the score as time expired.

Despite the American’s constant aggression throughout the match, Sousa was awarded the referee’s decision, much to the dismay of a visibly disappointed Musumeci.

Just a few weeks later, they met again at the 2017 Abu Dhabi World Professional Jiu-Jitsu Championship. This time, Musumeci was able to successfully hit a berimbolo to sweep Sousa, eventually taking a body triangle from the back, where he would stay for much of the match to earn a 2-0 points victory.

In both matches, Musumeci appeared to be a step ahead when attacking from his guard. The American’s berimbolo game and constant off-balancing and attacking from the open guard seemed to force Sousa on the defensive. For his part, Sousa showed a strong base and resistance to the sweep, but outside of occasional bursts of activity to try to pass Musumeci’s vaunted guard, he was largely stuck in defensive cycles.

What happened since their first two matches?

After facing Sousa twice in 2017, Musumeci would go on to win his second IBJJF Worlds gold medal — his first in the gi. He would then establish himself as arguably the greatest American BJJ competitor of all time, capturing gold at the IBJJF Worlds three more times.

In 2021, Musumeci took a break from competing in the gi to try his hand at no-gi competition. He found immediate success, defeating elite no-gi competitors like Junny Ocasio and Geo Martinez, all while showing off a preternatural understanding of the modern leg lock game.

In April of this year, Musumeci made his ONE Championship debut, submitting Japanese MMA and grappling legend Masakazu Imanari.

While Musumeci has turned into one of grappling’s top pound-for-pound competitors in the past five years, Sousa has struggled to find continued success at the highest levels of the sport, often losing in the finals of top-level tournaments.

In 2019, Sousa enjoyed perhaps his best year yet as a black belt, winning the Brasileiros and IBJJF Pans.

Although he is primarily a gi player, Sousa tried his hand at no-gi last year when he entered both of the ADCC South American Trials. In those tournaments, the Brazilian showed off a strong front headlock, a simple but effective half guard, and an excellent rolling kimura trap that he used to both take the back and attack the armbar.

How will the rubber match play out?

If their first two matches were any indication, we’re likely to see Musumeci playing from his back while Sousa attempts to pass. And while Sousa’s rolling kimura might lead to a scramble, it’s unlikely Sousa will be able to pass Musumeci’s notoriously impassable guard. Moreover, Musumeci has shown to be the more offensively potent grappler, forcing opponents like Sousa into long defensive cycles.

Another wrinkle to consider is Musumeci’s rapidly evolving leg lock game. After a 15-minute leg lock shootout with specialist Junny Ocasio and heel hook victories over Lucas Pinheiro and Richard Alarcon, Musumeci has fully established himself as one of the best leg lockers in the world. Don’t be surprised to see him go after Sousa’s legs early and often.

If Sousa wants to score the upset, he’ll need to take some big risks. Thankfully for him, ONE’s submission-only ruleset rewards aggression. With that in mind, Sousa’s best path to victory will likely be an ultra-aggressive, submission-hunting approach that forces Musumeci out of his own offensive cycles. Of course, doing that against a technical dynamo like Musumeci is much easier said than done.