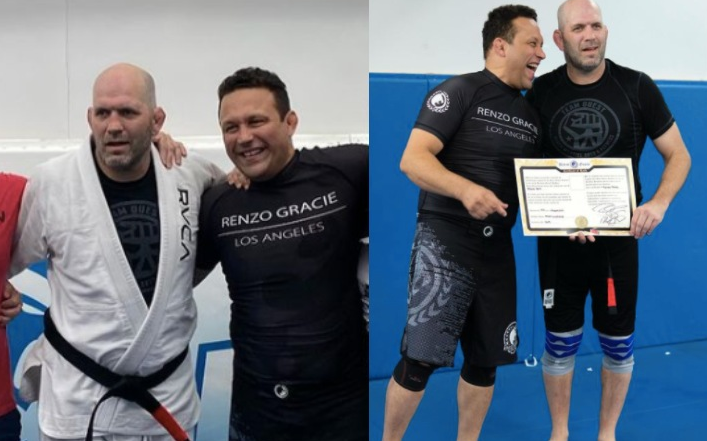 Last week saw UFC veteran Matt Lindland promoted to the rank of black belt in Brazilian Jiu Jitsu by the legendary Renzo Gracie. This promotion took place in Renzo Gracie’s New York City gym. Upon receiving his black belt, Lindland had posted on Instagram, “Honored to receive my blackbelt from Renzo Gracie! Always act like a white belt The jiujitsu journey goes on.”

Lindland received his purple belt 10 years ago from Fabiano Scherner, and a decade later he has been awarded his black belt from Renzo Gracie. Matt Lindland is a UFC legend with dozens of professional fights against some of the best Middleweights on the planet at the time spending the prime period of his career putting together a twelve-fight run in the UFC. The peak of which came when he fought Murilo Bustamante for the UFC Middleweight world championship title, but was submitted in the third round with a guillotine choke.

Most fans will remember Lindland for putting on a number of amazing performances in the Middleweight division including wins over some of the best in the division like; Pat Miletich, Phil Baroni, and Carlos Newton. In 2006, Lindland took on Quinton ‘Rampage’ Jackson during the best run of his career just under a year before he won the UFC Light-Heavyweight championship, and in 2007 he faced off with the greatest Heavyweight of all time, Fedor Emelianenko.

It’s been a long road to black belt for Lindland, who has been grappling for years and made his MMA debut way back in 1997 retiring with a record of 22-9. Whilst fighting, he also had a successful wrestling career – earning silver in the 2000 Sydney Olympic games. Another great feat for a great martial artist.

Renzo Gracie Academy announced the news of the BJJ black belt awarded to Matt Lindland in a post to his official Instagram account, and Lindland himself soon followed it up with one of his own.