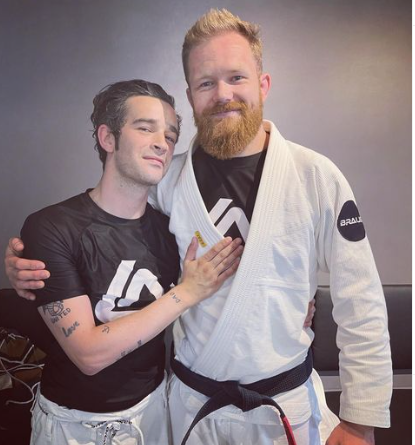 Frontman of British pop band The 1975 Matty Healy is another celebrity who has also decided to take up the self-defense martial art of Brazilian Jiu-Jitsu.

The singer recently dropped into Roger Gracie Academy HQ, London for some private sessions with black belt coach Alex Smith. However, Healy’s martial arts coach is black belt Ben Richardson of Can Do Martial Arts; Richardson is also a Jeet Kune Do and Kali black belt as well as a 5th Dan black belt in Karate. If you want to find out more about Healy’s interest in martial arts listen to his interview with his coach on Richardsons podcast called The Karate Podcast.

For those The 1975 fans reading, who don’t know what BJJ is, in shorthand, Brazilian Jiu Jitsu is a self-defense martial art based around: joint locks, chokes, throws and being able to dominate and pin your opponent. BJJ is strongly influenced by Judo and was founded by the Gracie family to allow a smaller person to gain leverage over a much larger untrained opponent (read more about the origins of Brazilian Jiu-Jitsu here).

A Rise in Celebs Taking up BJJ

A lot of celebrities have been seen to have taken up BJJ recently, and people’s reasons for doing so often vary. Some people watched Roger Gracie on UFC back in the day and got inspired (such as, Joe Rogan, and Poison drummer Ricky Rockett), others wanted to try it out for fitness reasons (BJJ is an intense workout where you can burn up to 700 calories an hour), some try it to help them perform stunts (Keanue Reeves in John Wicks), some do it because they want to learn self-defense and others purely for the fun of it (Jonah Hill, Scott Caan).