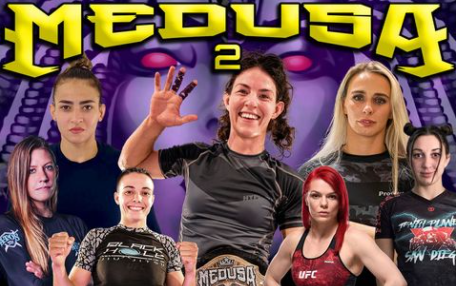 On Saturday, March 12, Medusa Female-Only Jiu-Jitsu will return for its second event. The card will feature an eight-woman combat jiu-jitsu (CJJ) tournament with some of the best no-gi grapplers in the world, including Who’s Number One (WNO) champion Ffion Davies and returning Medusa CJJ champion Brianna Ste-Marie.

The promotion announced the event on social media.

A post shared by Medusa Female Only Jiu-Jitsu (@medusafojj)

Below is the current Medusa 2 line-up:

Brianna Ste-Marie: One of 2021’s breakout competitors, Ste-Marie won the inaugural Medusa CJJ tournament, adding to her CJJ 125-pound world title. She won gold at the 2021 ADCC East Coast Trials, and is coming off a decision win over Amanda “Tubby” Alequin at WNO.

Bia Mesquita: The field’s most accomplished jiu-jitsu competitor, Mesquita is an ADCC world champion and a seven-time IBJJF world champion. She competed in first Medusa CJJ tournament, losing in the first round.

Fatima Kline: Another talent on the rise, Kline won the inaugural Medusa EBI-rules 115-pound tournament. Kline is expected to compete in her second professional MMA bout at Invicta FC 46 on March 9.

Gillian Robertson: A UFC veteran since 2017, Robertson is a BJJ black belt that can frequently be seen competing in grappling. She competed in the first Medusa CJJ tournament and lost to Nikki Sullivan by kneebar.

Nikki Sullivan: A black belt under Andre Galvao, Sullivan is a Masters world champion. She came up just short in the finals of the first Medusa CJJ tournament, losing in overtime to Ste-Marie.

How to watch: Medusa 2 takes place on Saturday, March 12 and will air live on UFC Fightpass (subscription required).