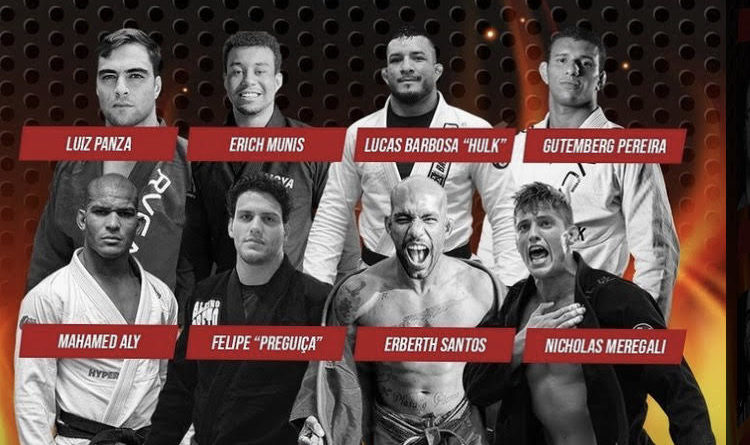 On Saturday, February 6, 2021, the Brazilian-based promotion BJJ Stars will return with an eight-man, one-night heavyweight grand prix made up of some of the best gi grapplers in the world. The card also features a number of super fights featuring top competitors like Leandro Lo, Roberto Jimenez, and Bia Mesquita.

Luiz Panza – The Checkmat black belt and longtime training partner of Marcus “Buchecha” Almeida is one of the best-ever leg lockers in the gi, specializing in the 50/50 position.

Erich Munis – Munis is a black belt under Isaque Bahiense, who will be competing in a super fight on the card. Still relatively new to the black belt competition scene, he is a Copa Podio heavyweight grand prix champion and holds an impressive win over Victor Hugo.

Lucas “Hulk” Barbosa – On a team filled with elite competitors, Barbosa is one of Atos Jiu-jitsu’s finest. A takedown and guard passing specialist, Barbosa is an IBJJF world gi and no-gi champion and earned a third-place finish at the 2019 ADCC championships.

Gutemberg Pereira – One of the field’s lesser-known competitors, Pereira holds a number of impressive wins in his career, including victories of Josh Hinger, Mahamed Aly, and Gabriel Arges.

Mahamed Aly – A black belt since 2015, the Team Lloyd Irvin representative has been an elite competitor in both gi and no-gi competition. He is an IBJJF world gi and no-gi champion.

Felipe Pena – Pena is probably the field’s most accomplished competitor. A Gracie Barra representative, Pena is an ADCC champion and IBJJF world gi and no-gi champion. And although Pena has competed only sparsely over the past couple of years, he holds two wins over current no-gi king Gordon Ryan from 2016 and 2017.

Nicholas Meregali – An Alliance Academy representative, Meregali has one of the most dangerous guards in heavyweight BJJ. He is an IBJJF world champion and holds wins over Roberto “Cyborg” Abreu, Barbosa, Santos, and Hugo.

In a field of elite and experienced grapplers, who will come out on top? To be sure, grapplers like Pena, Panza, and Santos have deep records of high-level competition, but there doesn’t seem to be a clear-cut favorite in the field as relatively younger black belts like Meregali and Munis are still improving and are real threats to win the tournament.