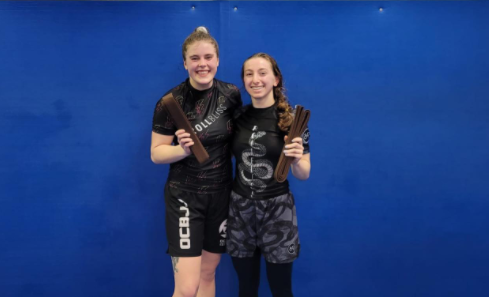 Tom DeBlass is confident in his students, to say the least.

Over the past few weeks, DeBlass has watched as Dale Brown, the founder of Detroit Urban Survival Training (D.U.S.T.), has become a viral sensation for his self-defense videos that claim to “increase your survivability.” Within the grappling community, Brown is largely seen as a joke. Many of his techniques, particularly those that involve grappling, seem wholly unrealistic.

Frustrated, DeBlass issued a challenge to Brown. DeBlass offered $50,000 to Brown if Brown could subdue one of two female brown belts under DeBlass. Those two brown belts are Jaidyn Muller and Sophia Cassella.

“I think it would be a fairly easy day for both of them,” DeBlass told Grappling Insider.

Jaidyn Mueller has been involved in martial arts essentially her entire life. Starting with Taekwondo at age three, followed by Karate, Mueller found jiu-jitsu at age 11 and hasn’t looked back since. In August of 2020, Mueller moved from Colorado to New Jersey to train under DeBlass at Ocean County BJJ.

“I’ve just always been a fan of [DeBlass] and his game,” Mueller told Grappling Insider. “I just really knew he could get me to where I wanted to be.”

Sophia Cassella started training exclusively in jiu-jitsu when she was 12 and, like Mueller, has since focused all of her efforts on pursuing jiu-jitsu full-time. She took remote classes to finish high school just so she could train daily with John Danaher and the Danaher Death Squad in the infamous blue basement in New York City. After the squad relocated to Puerto Rico, Cassella began splitting her training time between DeBlass’ academy twice a week and Serra BJJ four times a week, where she trains under Jason Rau.

Cassella’s round-trip driving time to each gym is about three hours, six days a week.

“I basically live in my car,” she told Grappling Insider.

Mueller and Cassella, who were both recently promoted to brown belt, have already found plenty of success in competition.

Mueller, who DeBlass describes as a “very physical… intense competitor,” was a 2021 IBJJF no-gi world champion, no-gi Pans silver medalist, and a Fight To Win no-gi champion at purple belt. Cassella, who DeBlass says is “exceptionally technical,” was a no-gi Pans champion, a no-gi Worlds silver medalist, and recently captured the Finishers Sub-Only 125-pound title. Simply put, both women are on a path that leads to the top of competitive jiu-jitsu.

“They both flip that switch better than most people do,” DeBlass said of his students.

Naturally, Mueller and Cassella both have big goals in jiu-jitsu.

Given their trajectory in the sport and who they train under, it’s hard not to compare Mueller and Cassella to two other competitors that have trained extensively under DeBlass — ADCC medalist Garry Tonon and multiple-time ADCC champion Gordon Ryan.

“I see their work ethic being similar to those boys,” DeBlass said. “Those guys will just out-work anybody and so will these girls.”

Indeed, it’s that work ethic, dedication to the craft, and proven ability in competition that led DeBlass to bet $50,000 of his own money that either one of them could best Dale Brown of D.U.S.T. viral fame. And make no mistake, this isn’t bluster; DeBlass is ready and willing to put his money where his mouth is if Brown will accept the challenge.

“I really think he would want to see that,” Cassella said about DeBlass going through with the challenge. “I also think that he has total faith in me and Jaidyn. He knows that this guy is literally untrained and we could handle ourselves with this guy. I think he truly believes that.”

Prior to the challenge, Cassella wasn’t even aware of Brown. But for Mueller, Brown was a punchline — a self-anointed self-defense specialist that was spreading dangerous misinformation about how to handle yourself in a real-life altercation.

Fiercely competitive, when Mueller first learned about DeBlass’ challenge, she became excited about the possibility of putting Brown in his place.

“I’ve just seen his videos and they’re always really funny to watch,” she said. “We were kind of like ‘what the f*** are you teaching these people?’ I’m super pumped about the challenge. I really hope he takes him up on it because I’m ready to go, I’m always ready.”

What if Brown actually accepts the challenge? What if he shows up to DeBlass’ New Jersey academy, ready to test his skills in “survavability” against either woman, hoping to collect $50,000?

DeBlass, Mueller, and Cassella are all supremely confident.

“I think that they will literally end up catching his leg and breaking his leg very quickly or finding his back and strangling him,” DeBlass predicted. “Sophia likes triangles. I wouldn’t allow her to triangle this guy because he could pick her up and slam her. Jaidyn likes triangles, as well. I wouldn’t let her do that, as well… I want them to hunt the leg or take the back. Even if they took the back and he stood up, I would have them let go of the back because I don’t want him to slam them down. Ultimately I would have them hunt the leg and I do believe that they would find the leg and he would not rain down punches on top them.”

Similarly, Cassella has a relatively clear image of how she would handle Brown.

“This is something that we practice every day,” she said. “Every day I train with grown men and I’ve practiced defending myself against their attacks. I feel like anything this guy would try to do to me wouldn’t work. But also the things that he’s showing are not real moves. They’re not realistic…

“It wouldn’t be anything new to me. But the difference is this guy is not trained and the people I’m training with are training. So this could be easier than training. I’m gonna put my hands on this guy and he’s gonna have no idea what to do…

“I feel like he would probably try to grab me by my clothes or reach his hands out to me and from there I would probably initiate some type of grip fight where I get behind him and take him down, or I get behind him and jump on his back and try to strangle him. I definitely see myself trying to get on top of him, get his hands to the ground… I feel like he wouldn’t even know what to do.”

Mueller’s prediction is less detailed, but, like Cassella, she draws confidence from her years of near-daily training in jiu-jitsu.

“I train under the best in the world,” Mueller said. “I train with a high level team. I fight men every day that are twice my size, and I hold my own, and I do really well. I think no matter what you say, people that don’t train are never gonna be able to truly understand until they see it happen… I’ve been training my whole life and I hold my own against grown men…

At the time of writing, Brown had yet to respond to DeBlass’ challenge, but DeBlass remains undeterred, continuing to post on social media to not only draw attention to Brown’s lack of credibility, but also to boost two of his most promising students.

As for Mueller and Cassella, they’re ready and plenty willing to test their “survivability” against Brown, if he ever accepts the challenge.