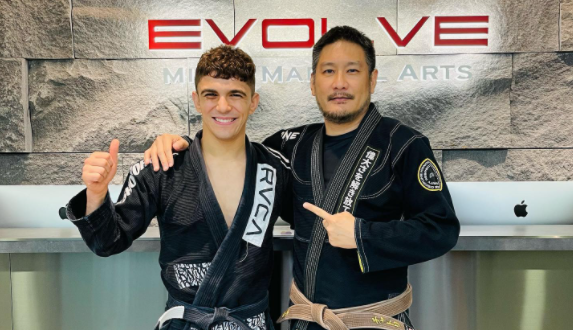 Never one to stay in one place for too long, top American grappler Mikey Musumeci has announced his move to Singapore, where he will train and teach at Evolve MMA.

I MOVED TO SINGAPORE !!! // So I want to announce that about 3 weeks ago I made the move to Singapore (Asia) to represent, train, and teach under @evolvefc . Mr. @yodchatri has been such a mentor and idol to me, guiding me so much in life and as a human and I am blessed to have met him and to have his guidance in my life. He is already family to me and I am so so blessed to spend so much time with him. ❤️😊 I am so happy. I want to thank everyone in My life for helping me so much to get to where I am. I will miss you all so much but I promise I will see you soon

The announcement comes on the heels of Musumeci’s successful ONE Championship submission grappling debut in which he submitted MMA legend Masakazu Imanari by rear-naked choke. The win also earned Musumeci a $50,000 bonus.

Although Musumeci first made a name for himself as a gi competitor, in 2021 he returned to no-gi competition. He defeated top competitors like Lucas Pinheiro, Junny Ocasio, and Geo Martinez before suffering an upset submission loss to Gabriel Sousa at the WNO Championships in September. He quickly bounced back, though, capturing the inaugural WNO title with a submission win over Richard Alarcon. Musumeci successfully defended that title earlier this year against Estevan Martinez.

That success in no-gi competition earned Musumeci an invite to the 2022 ADCC World Championships in September.