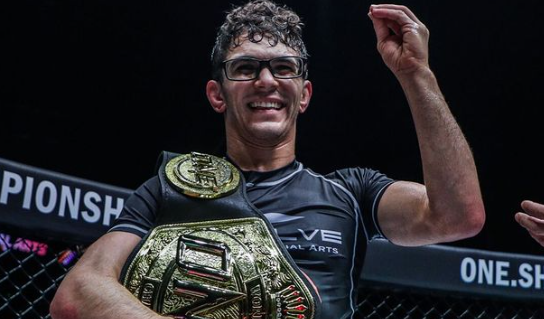 Top BJJ competitor Mikey Musumeci has made history. On Friday at ONE on Prime Video 2, Musumeci won the first-ever submission grappling world title match in ONE Championship history as he defeated Cleber Sousa by way of decision.

The last man to beat Musumeci in the light-feather weight class, Sousa was a game opponent who had a strong showing even in defeat.

The entirety of the 10-minute submission-only contest took place with Musumeci attack from his open guard while Sousa tried a variety of passes. Sousa found the most success running around Musumeci’s guard into a north/south position — the same tactic used by Gabriel Sousa (no relation) to defeat Musumeci last September at the Who’s Number One Championships.

This time, though, Musumeci had an answer, inverting and locking up one of Sousa’s legs each time he tried to pass. Those leg entanglements led to the American’s best offense; he came close on several inside heel hooks, but Sousa displayed an excellent understanding of position and urgency to escape.

In the final minutes of the match, Musumeci began to focus his attack on Sousa’s upper body, but again Sousa was able to slip out of any deep submission threats.

Ultimately, Musumeci was awarded the clear-cut decision on the strength of his constant attacks and multiple near-submissions. He improved his ONE record to 2-0 and is now the ONE flyweight submission grappling champion.

After the match, the newly-crowned champ made a “respectful request to roll” with all-time MMA great and current ONE flyweight MMA champion Demetrious “Mighty Mouse” Johnson.