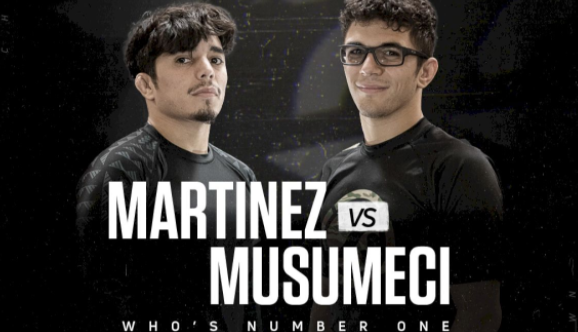 Mikey Musumeci, the reigning Who’s Number One (WNO) bantamweight champion, will defend his title on just over a week’s notice. Filling in for Jon Calestine, Musumeci will be taking on Estevan “Giant Slayer” Martinez, and agreed to put his title on the line.

After years of competing exclusively in the gi, Musumeci turned his attention to no-gi in 2021, picking up wins over Marcelo Cohen, Lucas Pinheiro, Junny Ocasio, and Geo Martinez before suffering an upset submission loss to Gabriel Sousa at the WNO championships. He quickly bounced back to form with a lightning-fast submission win over Richard Alarcon to capture the WNO title, and finished out the year in the gi, winning his fourth IBJJF world championship.

This will be Musumeci’s first defense of his WNO title.

Martinez is one of the most active and fearless competitors in jiu-jitsu. Known for competing (and often succeeding) in the absolute division, despite being a roosterweight, Martinez was a 2021 IBJJF no-gi Worlds and Pans champion. Martinez’s overtime victory against Cameron Melott at the Emerald City Invitational was a match of the year contender, and he had a strong showing at the ADCC East Coast Trials where he would lose to eventual champion Cole Abate.

The match-up between Mikey Musumeci and Estevan Martinez represents a stark contrast in styles. Musumeci is the consummate technician, methodically working to dominant positions but always with an eye for the submission, whether it be lower or upper body. Martinez, on the other hand, is a near-constant ball of motion. He tends to rely on his world-class submission defense and endless scrambles to out-work his opponents, often finding the back.

Ben Coate has 666 posts and counting. See all posts by Ben Coate