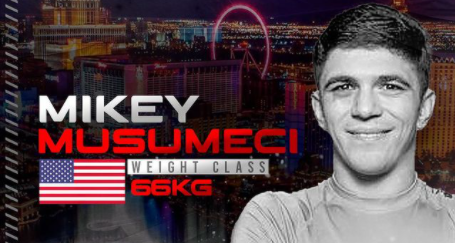 Many expected it, but now it’s official. Five-time IBJJF world champion and current Who’s Number One (WNO) bantamweight champion Mikey Musumeci has received an invite to the 2022 ADCC Championships.

Musumeci will be making his ADCC debut and will be competing in the -66 kg. division.

Although Musumeci won his first IBJJF world championship in 2016 at the no-gi Worlds, most of his career accomplishments have taken place in gi competition, winning the gi Worlds each year they have taken place since 2017.

In 2021, Musumeci returned to no-gi competition. He defeated top competitors like Lucas Pinheiro, Junny Ocasio, and Geo Martinez before suffering an upset submission loss to Gabriel Sousa at the WNO Championships in September. He quickly bounced back, though, capturing the inaugural WNO title with a submission win over Richard Alarcon.

Musumeci is coming off a decision win over Estevan Martinez in what was Musumeci’s first defense of his WNO bantamweight belt.

Musumeci has competed under the ADCC ruleset just once — his decision win over Geo Martinez. Largely known as a guard and leg lock specialist, Musumeci’s training with Pedigo Submission Fighting will certainly help him bolster his wrestling and takedown game as he prepares for his first-ever ADCC Championships.