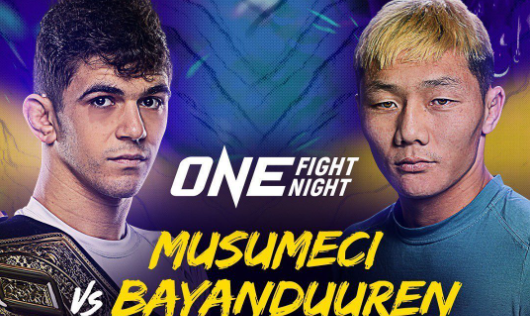 In yet another chapter of the BJJ-versus-Sambo rivalry created by ONE Championship, the organization’s flyweight submission grappling champion, Mikey Musumeci, is set to take on 2022 Combat Sambo world champion Gantumur Bayanduuren.

The 10-minute submission-only contest goes down on Friday, January 13 at ONE Fight Night 6: Superbon vs. Allazov and will air in U.S. primetime live from the Impact Arena in Bangkok, Thailand.

Widely regarded as one of jiu-jitsu’s top pound-for-pound competitors, Musumeci captured the inaugural ONE flyweight submission grappling world title in September 2022 at ONE on Prime Video 2 when he defeated Cleber Sousa by way of decision. The showdown with Bayanduuren will be the 26-year-old’s first defense of his title.

Shortly after his win over Sousa, the newly-crowned champion called for a match against the top Sambo competitor in his weight class. Bayanduuren fits the bill.

Bayanduuren is essentially brand new to high-level no-gi submission grappling. He is, however, currently the top Combat Sambo athlete in Musumeci’s weight class after winning his first world championship last November. And in addition to his Sambo accolades, the Mongolian holds the rank of brown belt in BJJ and sports a 3-1 (1 NC) professional MMA record.

If history is any indication, the Sambo player is in for a rough night. Jiu-jitsu has dominated across three BJJ-versus-Sambo matchups with BJJ black belts Rodrigo Marello, Kade Ruotolo, and, most recently, Danielle Kelly all walking away with relatively easy submission victories over high-level Sambo competitors in ONE Championship.

If Bayanduuren has a path to victory, it is to maintain top position, avoid Musumeci’s submission attempts – particularly his leg locks – from open guard, and apply just enough passing pressure to earn a decision.

Indeed, that was the strategy employed by Sousa in his unsuccessful bid for the title. And while he came up short against Musumeci, he did nonetheless survive the full 10 minutes and enjoyed several moments of success in near passes, perhaps giving hope to a challenger like Bayanduuren.

How to watch: ONE Fight Night 6 takes place on Friday, January 13 and will air live on Prime Video (free with Amazon Prime subscription) beginning at 8 PM EST.