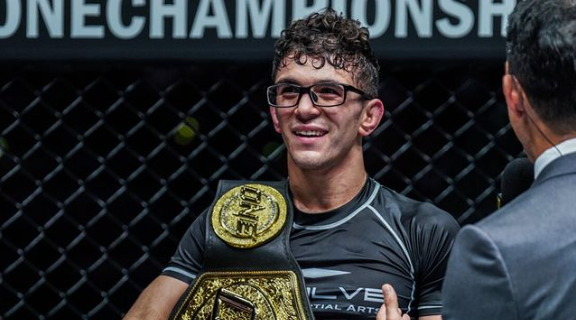 Mikey Musumeci will defend his ONE Championship submission grappling world title against Sambo world champion Sayan Khertek at ONE on Prime Video 6.

ONE Championship continues to pit Sambo against BJJ in art-versus-art submission grappling matches. The next such matchup will feature Mikey Musumeci defending his flyweight title against Sambo world champion Sayan Khertek at ONE on Prime Video 6 at the Impact Arena in Bangkok, Thailand.

Musumeci captured the title in October at ONE on Prime Video 2 when he earned a clear-cut decision victory over Cleber Sousa – the first man to defeat him at black belt.

Shortly after that victory, ONE Championship released a video of Musumeci calling for a match against the top Sambo player in his weight class, adding fuel to the budding rivalry between BJJ and Sambo.

As a 2022 Sambo world champion, Khertek certainly fits the bill. His world title showdown with Musumeci will not only be his promotional debut but also his first time competing in high-level no-gi competition.

Perhaps unsurprisingly, BJJ currently holds a 3-0 advantage over Sambo after a trio of submission grappling matches in ONE Championship, with each match ending in submission.

Given that background and their respective levels of experience, Musumeci will come into this contest as a massive favorite. He is an IBJJ no-gi world champion, is undefeated in ONE Championship, and holds notable no-gi wins over the likes of recent no-gi world champion Lucas Pinheiro, ADCC veteran Geo Martinez, and dangerous leg locker Junny Ocasio.

Meanwhile, Khertek will hope to lean on his extensive experience competing in Sambo and judo – two sports in which grapplers wear a gi top. In addition to his 2022 Sambo world title, the 35-year-old also owns a 2017 Sambo world title.