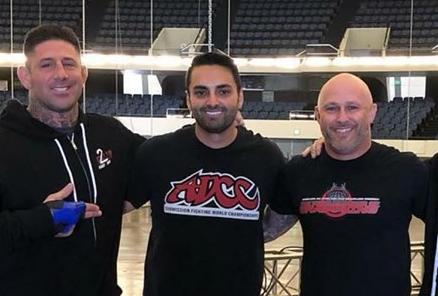 The ADCC World Championships are the most prestigious event in submission grappling, the closest thing jiujitsu has to a Super Bowl. The biennial grappling tournament transforms unknowns into megastars overnight. Just ask Eddie Bravo.

The man in charge of this year’s ADCC World Championships, which kicks off September 28 in Anaheim, California, is Mo Jassim, a wealthy, 38-year-old California raised fight fan who caught the BJJ bug 18 years ago. The tournament will crown a handful of no-gi grappling world champions. This year’s tournament is also poised to crown Mo Jassim as one of the sport’s most powerful behind the scenes promoters.

After all, more than half of the 98 fighters competing at the ADCC World Championships are there by invite. And that invite list is largely in Jassim’s hands. (He and ADCC head judge Peter Baltaliyski decide who’s in and who’s out, and submit their choices to ADCC chief Guy Neivins for final approval, Jassim said).

This is Jassim’s first year at the helm of grappling’s biggest event. And he is promising to transform what in the past looked like a high school wrestling match, into a spectacle befitting the caliber of the fighters.

“Everybody is going to be blown away,” said Jassim. “It’s going to be something you’ve never seen before. I truly believe this could be the biggest jiu jitsu show of all time.”

That’s big talk for someone who, not long ago was mostly known as a just another grappling enthusiast willing to pay generously for top grapplers to fly out to Abu Dhabi to give him private lessons, or to come stay and train with him in Beverly Hills.

Jassim spent his formative years in the USA, but travelled to Abu Dhabi in 2001 to visit family members who were living there at the time.

In the mid-1990s, Sheikh Tahnoon Bin Zayed, took up jiujitsu while a student at San Diego State University. When he returned to Abu Dhabi he brought his love of the sport with him. He founded the Abu Dhabi Combat Club, a training center for grapplers, imported hundreds of black belts from Brazil to teach, and started the ADCC Submission Wrestling World Championship in 1998.

Jassim’s 2001 visit happened to coincide with that years ADCC championships. Sheikh Tahnoon put on a good show. He brought the top grapplers in the world to compete. The early ADCCs saw such legends as Royler and Renzo Gracie, Mark Kerr, Mario Sperry, John Lewis and the Machado Brothers, among others. And the ADCC team handed out generous prize purses, unheard of in the sport at that time. In addition to all expense paid trips to Abu Dhabi, fighters won an additional $10,000 for winning their weight class, and an additional $40,000 for winning the absolutes.

On the eve of the 2001 tournament, Rigan Machado told his hometown newspaper in Hermosa Beach that, “the Abu Dhabi tournament is the number one competition in the world today.” Submission grappling had found its own Olympics.

Jassim became enthralled with the sport. He went back to California and started to train under Royler Gracie black belt Cleber Luciano.

The ADCC World Championships, meanwhile, became an increasingly international affair, held every two years instead of every year, which only added to its prestige. In 2003 the contest was held in Brazil. That year’s championships saw the emergence of a then 20-year-old Marcelo Garcia and the stunning upset of Royler Gracie by a little known brown belt named Eddie Bravo. In 2005, the tournament came to the Long Beach Pyramid in southern California, close to where Jassim was living and training.

Jassim says the 2005 championships remains, to this day, the greatest jiu-jitsu tournament he’s ever seen. Roger Gracie tore through the field, submitting every one of his eight opponents in both his weight class and the absolutes.

“After that, I was like, I have to get involved,” said Jassim.

The following year, Jassim moved to Abu Dhabi to join his brother. He started working for the ADCC organization. He already knew Peter Baltaliyski, a top ADCC official. And he was well connected in Abu Dhabi.

Jassim worked the 2007 championships in Trenton, New Jersey “as a wristband boy,” he said. He moved up to working weigh-ins at the 2009 and 2011 championships, in Barcelona and Nottingham. In 2013, the championships moved to Beijing and in 2015 to Brazil. By then, Jassim had risen the ranks to the point where he was helping shape the brackets, determining who fought who.

Jassim had established himself as a hard working, loyal team member, with a passion for the sport and strong relationships with many of the top athletes. But he also had a promoter’s matchmaking instincts. When he wasn’t working for the ADCC, Jassim didn’t hesitate to use his personal wealth and growing connections within the sport to make fights happen that he wanted to see.

In 2016, for example, Jassim flew Keenan Cornelius out to Abu Dhabi for two weeks of private lessons, he said. The two became friends. Soon after, Cornelius booked a super fight with the then up-and-coming Gordon Ryan. Jassim didn’t like Ryan.

“Gordon was a little lippy back then,” said Jassim. “The guy was a punk. I hated the guy. So I call Keenan and say please beat this guy. If you beat this guy, I’ll give you $5,000.”

The two squared off in August 2016. In the no time limit submission only match, Gordon submitted Cornelius via heel hook in the 90th minute.

Jassim was disappointed to see Cornelius lose to Gordon. So Jassim studied up on the current crop of submission grapplers. He decided Felipe Pena had the strong cardio and aggressive style best suited to defeating Gordon. And in December 2016, Jassim organized a superfight pitting Ryan against Pena, hoping to see controversial Ryan fall.

This time his plan worked. Pena submitted Ryan via rear naked choke in the 40th minute. But instead of reveling in the defeat of the outspoken grappler, Jassim and Ryan became friends.

I met this man here when I was a 4 stripe white belt and he was already a 2 time no gi world champion at brown belt and on his way to adcc at 20 years old. All I could do is sit in the chair in and watch in awe as he dismantled all my usual training partners with ease. And all I thought to myself was “man I really hope I can be like that one day” and the truth is that one of the biggest reasons I’m like this today is because of him. Him, @tomdeblass, and my 1st coach ever @prof_miguelbjj always told me constantly I could be the best in the world. And they truly believed it. No-one knows this. But garry literally spent tens of thousands of dollars on me just so I can train. Paying both of our ways into the city for YEARS. That in itself is 2k a month. Buying my meals in the city. Buying my flights to major comps. And letting me teach at his gym @brunswickbjj and STILL paying me even though he paid for my life. Nothing I can do can ever repay that. So for anyone who talks shit about @garrytonon… go die. Bec there are few friends on this earth better than this one. Photo by @jeffreyschu #fighterplus @musclepharm @phalanx_usa @studio540 @kimerakoffeee @thearmbarsoapcompany @adccnorthamerica

In the Spring of 2017, Jassim was tapped to run the ADCC North American West Coast Trials.

Jassim spared no expense. He held the trials at the Anaheim Convention Center, and for the first time ever at an ADCC qualifiers, doled out prize money to fighters, $1,500 for first place, $1,000 for second, and $500 for third. On top of that, he spent another $150,000 on five main event worthy super fights, including Marcus ‘Buchecha’ Almeida vs Rafael Lovato Jr., Vinny Magalhaes vs Roberto ‘Cyborg’ Abreu, and Gordon Ryan vs. Leandro Lo.

“I went crazy on that one, I lost a ton of money on it, but I wanted to make a name for myself as an organizer“ said Jassim. “No one really knew who I was before that.”

Jassim said he lost about $200,000 out of his own pocket on the 2017 West Coast Trials. But while it may have been a financial flop, in the eyes of the jiu-jitsu world, and his ADCC bosses, it was a rousing success. Jassim’s spare no expense approach and attention to detail earned him a shot at running this year’s worlds.

“He literally cares about every aspect, from the catering of the food, to which medics we’re hiring, to security, every single thing is very important to him,” said Seth Daniels, the Fight2Win CEO who is working with Jassim on this year’s championships.

Jassim is promising to revolutionize the show. That’s why he’s brought on Daniels, a former Vice President with 24 Hour Fitness, who is both a skilled jiujiteiro and a successful businessman, with long experience as a martial arts and concert promoter. Daniels’ Fight2Win promotion has put on over 120 fights since 2015.

“Our goal is to make the appearance of it fit the caliber of the athletes,” said Daniels. Why should you have an event with 96 of the greatest fighters in the world and have it look like a high school wrestling tournament. It should look bigger, look more professional, as close to the Olympics as you can possibly make it.”

It’s been 12 years since the ADCC World Championships was last held on U.S. soil. In that time, the sport has grown steadily in popularity. In a sign of that growth, USA Today and ESPN each sent a reporter to cover the West Coast qualifiers in Spring.

Already some juicy storylines are taking shape for this year’s bout. In the 66KG division, Cobrinha was poised to do what no one has ever done in ADCC history: win his division four times in a row. But instead, he pulled out to make way for his son, 22-year-old Kennedy Maciel, the 2018 IBJJF no-gi world champion, and one of a handful of young guns looking to make their mark against the sport’s old guard at their first ADCC World Championships.

If Yuri Simoes can pull out the victory in a stacked heavyweight 99kg+ division, he’ll be the first person to win ADCC Championships in three different weight classes. Eighteen-year old Nicky Ryan, Gordon’s younger brother, will be looking for his first ADCC title, after losing to AJ Agazarm in the 2017 Championships in Finland. His 66kg bracket includes formidable opponents, including Paulo Miyao, Gianni Grippo and Kennedy Maciel .

“He’s one of the most technical guys I’ve trained with and he’s finally gotten his man strength,” said Jassim of the younger Ryan.

Among the 16 women competing, Gabi Garcia will be gunning for her fourth title.

And finally there’s the super fight, pitting Andre Galvao, who won his superfight in the 2017 ADCCs, against Felipe Pena, the 2017 ADCC Absolute Champion. It’s set to be a hard fought bout between two feuding rivals who have faced each other four times, with each winning two. Galvao is perhaps the most decorated fighter in ADCC history. There is some chatter that this could be the 36-year-old’s last fight. The 27-year-old Pena, meanwhile, is widely considered the number one no-gi fighter in the world.

The fight pits two storied schools against each other, Atos and Gracie Barra, in a sort of local derby match. Atos is based in San Diego, and Pena’s coach, Romula Barral’s Gracie Barra school is in nearby Northridge. Both fighters will have legions of supporters in the stands, which early ticket sales suggest will be the most packed stands in ADCC history.