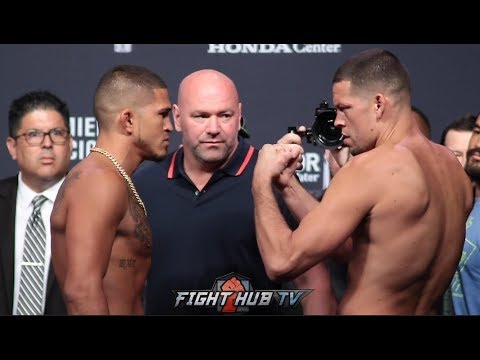 During the build-up to UFC 241 the majority of the focus has been on the headliner, understandable considering that Cormier V Miocic 2 is the biggest available fight in the heavyweight division right now. This has drawn a lot of eyes away from what promises to be a barnburner of co-main event this weekend between Nate Diaz and Anthony Pettis.

On paper These men have a lot of similarities, they are both high-level strikers who prefer to stay on the offence and maintain a consistently high pace throughout a three or even five round fight. Neither man ever really looks for a takedown either as they both average around 1 for every 15 minutes of cage-time, that doesn’t mean that they won’t be happy if the fight does get to the ground however.

Both men have spent the majority of their career at Lightweight with Diaz having more experience at Welterweight throughout his career, but Pettis arguably having greater success as he recently knocked out ex-title challenger Stephen Thompson.

Diaz is a 2nd degree black belt under Cesar Gracie and trains regularly with his older brother Nick, a 3rd degree black belt, and Jack Shields, black belt and NCAA Division 2 wrestler. He’s currently second-place in the UFC for most submissions of all time and only one behind Charles Oliveira with 12 submission finishes.

Pettis is no slouch on the ground either and is a black belt in his own right under Daniel Wanderley, known for being very successful in the Masters division of several IBJJF tournaments. He trains and spends the majority of his time at Roufousport with two of the best wrestlers in MMA, Ben Askren and Tyron Woodley.

Both fighters perform best on the ground off their back and have racked up several finishes between them by way of Triangle Choke and Guillotine shortly after being taken down or dropped. It’ll be interesting to see whether either fighter will dare to follow up a knockdown with shots on the ground or shoot for a takedown. They’ll both be aware of how dangerous they are and won’t want to risk the whole fight on one moment of over-confidence.