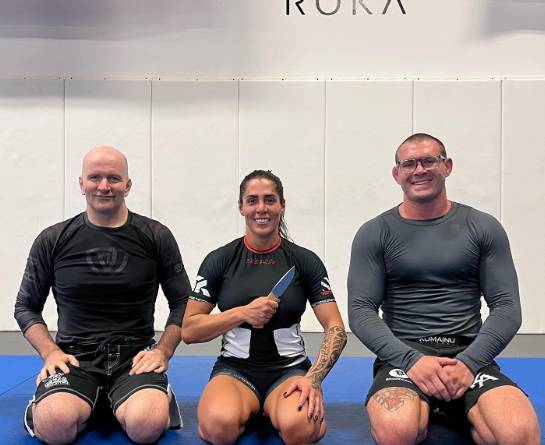 Nathalia Santoro becomes the second ever woman to be promoted to Brown Belt in BJJ by Professor John Danaher, and received her second knife too.

Danaher promoted Santoro to Purple Belt in February 2021, so around 18 months later she was then promoted to Brown Belt. Yesterday both Santoro and her boyfriend 2022 ADCC World Champion, Gordon Ryan announced the news on their Instagrams,

“Well that was a surprise! Today I got promoted to brown belt by my master John Danaher and professor Gordon Rayan. I have never expected receiving my brown belt anytime soon. John is known for being one of the hardest professors to belt students. He just won’t do it unless your skills are sharp and you are progressing faster than others. Period. In the beginning of this year I made a mistake of jokingly asking John when will I get my brown belt, because my birthday was around the corner. His answer was:“ Nathalia, you are Gordon’s Ryan woman, you are not a regular chick. People expect more from you just because of that. You have to be beating black belts as a purple belt easily before I give you a brown belt” . As I understand his point, its still hard to watch other athletes that were a blue belt at the same time as me becoming a black belt. Purple belts from other academies of course, received their purple belts after I did and now days are already black belts. It was truly not an easy thing to swallow, not because of jealousy but because we are on a sport where dominance wins and I for sure know I’m far better than them. As today, I’m very confident to say that I’m an exceptional brown belt thanks to countless hours of lessons from both, my master John Danaher and professor Gordon Ryan. I’m honored. @danaherjohn @gordonlovesjiujitsu. “

Gordon Ryan shared the same picture on his Instagram and said:

“She may suck at competing, but she is very good at jiu jitsu 😂. I am very happy to he part of this process. A huge congrats to @heysonnyy2 on a WELL deserved brown belt. She is now, to my understanding, John’s 2nd ever female brown belt, which is a big statement. Now if she can just learn a guard Pass she can get her black belt before age 60😂♥️.”

Everyone knows how strict Danaher is with grading his students so the promotion definitely would have been well deserved. Santoro has competed in the past and has proven her skills, having made appearances on Third Coast Grappling and Kasai 5, where she finished both of her opponents via submission. It appears Nathalia has no plans to compete in the future, although it sure would be great to see. Congratulations!