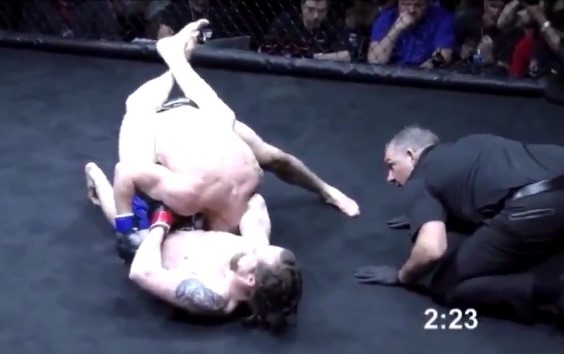 At New England Fights 28, Caleb Austin beat James Ploss via TKO. But that doesn’t quite tell the whole story. Minutes before that happened, Austin was deep in a guillotine choke, struggling to breathe. He tapped out on Ploss’ body and as Ploss jumped up to celebrate, the ref indicated for them to continue fighting. Austin wasted no time in taking Ploss down and firing off a few shots on his way to taking the back and attempting a choke of his own. As Ploss went belly down, Austin postured up to unleash vicious ground and pound to prompt the referr to (finally) call off the fight.

The whole thing was pretty ridiculous to watch and certainly caused much discussion in the MMA community once the spotlight was on it. New attention was provided by veteran American Top Team coach and former WEC champ Mike Brown. Brown used the incident to remind fighters to never stop fighting until the ref pulls you off.

We reached out to Ploss to get his take on the evening he and Austin debuted together. We asked him how he thought things were going that night up until that horrific moment of officiating.

“This kind of thing is both exciting and challenging,” Ploss told us. “It’s entering the unknown for the first time and a constant battle in your mind.” He said he’d been training a year and a half before he stepped into the cage to face Austin.

Ploss next spoke about the moment he realised something was wrong. He thought he was about to celebrate the best debut he could have hoped for at New England Fights 28. He thought this was a stoppage victory in the first minute of his amateur debut.

“Initially, from my side of the experience, I got the tap. I was filled with joy,” Ploss said, “I was in a whole different mind frame when I let him go because in my mind I thought everything was over. I thought I’d conquered the walls I’d been facing.”

Ploss conceded out of nowhere his world changed pretty quick.

“The first thing that happened to me was I was actually confused,” he said, “I remember getting hit a couple of times and I was still trying to figure out exactly what was happening. After I realized what I thought was over had continued to pursue its course.” Ploss said he eventually just began trying to react as fast as he could but it was too late.

We asked how much of an adrenaline dump Ploss experienced at that moment he thought he’d won?  “It was a huge dump of adrenaline,” he replied, “I understand what happened and the way it happened. I looked at different perspectives and made sense of it.”

Ploss doesn’t blame the referee but obviously wishes he’d been in a better position to see the tap. Ploss split his next two fights and currently has a record of 1-2.

Jimi Devine is a journalist based out of Oakland, California. Currently serving as Staff Writer at Cannabis Now, you can also find his work in the San Francisco Chronicle, The Boston Globe, The Hill, The Chronicle of High Education, L.A. Weekly, Marijuana.com, 7×7 Magazine, The East Bay Express, Leafly, Civilized, and Ed Rosenthal’s recent book This Bud’s for You. Jimi has a BA in Journalism and Media Studies from Franklin Pierce University.

Jimi Devine has 1 posts and counting. See all posts by Jimi Devine