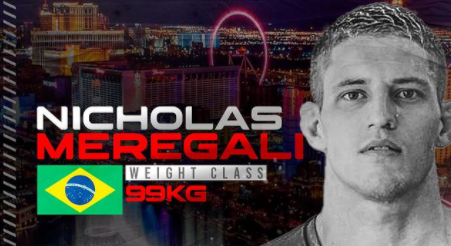 Accomplished gi competitor Nicholas Meregali will make his ADCC debut at the 2022 Championships later this year. Last week, the organization surprised some by announcing that Meregali had secured an invited to compete in the -99 kg. division.

“My division! Let’s make stupid people look even more stupid for saying I can’t fight No Gi. Thanks for the support @mojassim80 @adcc_official,” Meregali wrote in a comment.

Meregali has competed almost exclusively in the gi as a black belt, and has found plenty of success. He was an IBJJF world champion in 2017 and 2019, and holds notable gi wins over Victor Hugo, Kaynan Duarte, and current Who’s Number One (WNO) heavyweight champion Tim Spriggs.

At the 2021 IBJJF Worlds, Meregali found himself in controversy after he was disqualified from the event for making a lewd gesture during one of his matches. The disqualification forced him out of a highly-anticipated absolute final against rival Felipe Pena.

Ben Coate has 783 posts and counting. See all posts by Ben Coate