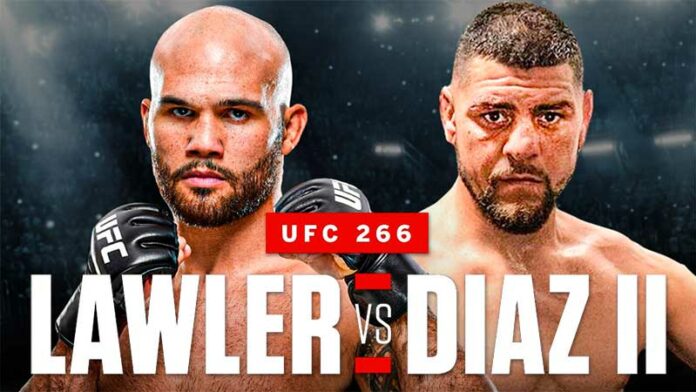 More than 17 years after their UFC 47 fight, Robbie Lawler and Nick Diaz are back – but who will come out on top this time?

The UFC has officially announced that Diaz will be taking on Robbie Lawler at UFC 266 on September 25 this year. This will be the second time that Diaz and Lawler have faced off, since their first fight against each other taking place 17 years ago at UFC 47. Diaz won the contest via second-round knockout.

Nate Diaz, Nick’s younger brother, made history earlier this year at UFC 263 when he competed in the first five-round, non-headlining, non-title bout ever held on a UFC pay-per-view with his decision loss to Leon Edwards. Now, Nick has the chance to do the same and will become one of only four men to hold that distinction.

37-year-old Diaz (26-9-2) hasn’t fought in the UFC since 2015, when he lost to Anderson Silva in a result that was later deemed a no-contest following Silva’s failed drug test. But Diaz failed three separate marijuana tests and was suspended five years by the Nevada State Athletic Commission following his matchup with Silva (it was later shortened to 18 months). His opponent, Lawler, has lost four fights on the bounce and the 39-year-old last fell to Neil Magny in August 2020.

UFC welterweight Robbie Lawler will be the betting favorite when he welcomes fan-favorite Nick Diaz back to action at UFC 266. MMA News states that Nick Diaz is currently an underdog for UFC 266 return fight against Lawler. The odds come after the UFC confirmed the return of Diaz earlier this week. Having not competed since his headlining fight against Anderson Silva in 2015, which saw the Brazilian’s unanimous decision victory overturned to a no contest, Diaz will be attempting to secure his first win in just shy of a decade.

Lawler (28-15-1), a former UFC Welterweight champion, is currently on a career-worst, four-fight losing streak. He has not won a fight since beating Donald Cerrone at UFC 214 on July 29, 2017. The two have faced off once before, a memorable showdown in 2004 at UFC 47. Diaz won that matchup by second-round knockout, but will he do it again?

The card will be headlined by a match for the featherweight belt between The Ultimate Fighter coaches Alexander Volkanovski and Brian Ortega. In another championship bout set for the event, dominant flyweight queen Valentina Shevchenko will look to defend her 125-pound title for the fifth time when she faces “Lucky” Lauren Murphy.