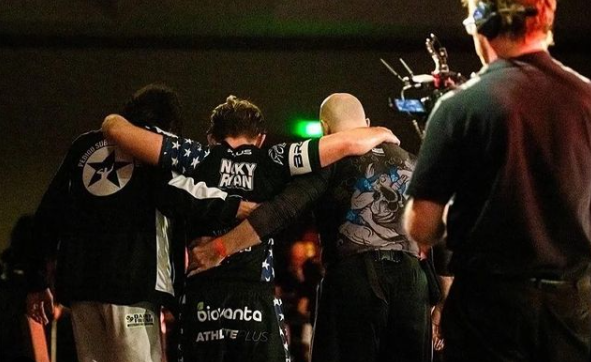 Nicky Ryan is potentially facing a six-month lay-off from competition.

At The Road to ADCC on July 17, Ryan earned an impressive points win over Dante Leon. But a little over halfway through that match, Ryan suffered a leg injury that clearly debilitated him, forcing him to grapple from his back for the remainder of the match. After the match, he was essentially unable to walk and needed to helped off the mat. On Friday, Ryan detailed the extent of his injury and outlined his potential path to recovery.

“… my meniscus has completely flipped around and it’s causing my knee to lock up. At this point I’m still unable to walk or extent my leg so it will definitely require surgery,” he wrote.

At this point, Ryan is faced with two options for recovery: surgery to repair his knee, with a four to six month recovery, or removal of the meniscus, which would require a four to six week recovery, but would likely cause arthritis in the future. According to Ryan, he hasn’t yet decided which path he’ll choose.

A black belt under John Danaher, Nicky Ryan is the youngest-ever ADCC competitor (16). He has competed three times so far in 2021, looking better each time. First, he earned a close decision win over PJ Barch at Who’s Number One, then followed that up with another decision win over Gabriel Almeida at another Who’s Number One event. His best performance of the year came at The Road to ADCC against Dante Leon, when Ryan showed off much-improved and effective wrestling. He is the younger brother to top no-gi competitor Gordon Ryan.