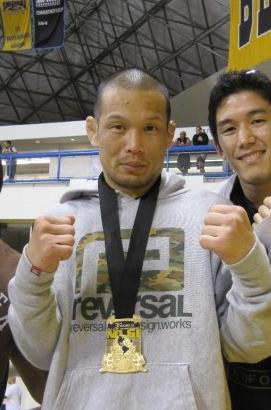 After suffering defeat at Fight 2 Win 132 just a few weeks before, Baret Yoshida was due to compete at No Gi Worlds 2019 in the Masters division at Featherweight. In a comparatively small division of only 8 fighters, Yoshida looked in a good position to take home a medal here due to his decades of high-level grappling experience.

He didn’t waste any time in his first round match against Jeremy Todd Romero as he shot in for a double-leg almost immediately, transitioned to a single and finished off by switching to double underhooks and hitting a trip takedown. As soon as the fight hit the mat, he caught a great arm-triangle position and worked to pass half-guard. From there it was less than a minute until Romero was forced to tap.

He then met Kleber Gadelha in the semi-final and sat to butterfly guard immediately. He hit a perfectly-timed butterfly sweep as Gadelha engaged and used it to set up a beautiful D’arce Choke. This got him the tap and another quick finish on his road to the final.

In the final against Murillo Carvalho Da Silva Neto, he was the one being taken down early before quickly latching onto a guillotine attempt. This forced Da Silva Neto to back up to defend the choke as Yoshida quickly switched to a Kimura grip and started used the Kimura trap to attack the back. As Da Sil defended the backtake and managed to return to Yoshida’s guard, Yoshida locked in a triangle choke that required some high-level submission defense to escape.

Baret Yoshida was using butterfly hooks beautifully to continue threatening the sweep and attempting armdrags. They were reset standing after going out of bounds and Yoshida was frantically pursuing the takedown as he was down on points due to the early takedown. The time ran out and Da Sil won 2-0 on the scorecard, with Yoshida racking up 5 advantages due to his relentless submission attempts during the match.