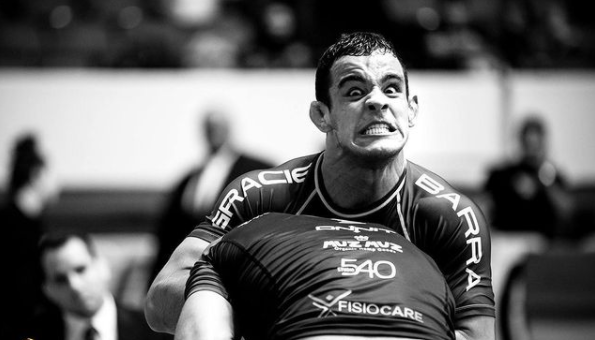 In the heavyweight division, Marinho defeated Adam Bradley and Yuri Santos before squaring off with ADCC veteran and one of Europe’s best competitors, Adam Wardzinski. As he did throughout the tournament, Marinho started quickly, taking Wardzinksi’s back and nearly sinking in a rear-naked choke in the first minute. Wardzinksi would survive, escape, and spend the remainder of the match unsuccessfully attempting to sweep Marinho from his trademark butterfly. Marinho defended well, though, and walked away with a 6-0 victory.

In the finals, Marinho faced veteran competitor Vagner Rocha in a very contentious match. The entire contest took place on the feet, with neither man ever able to secure a takedown or come particularly close. However, Marinho was able to twice score two points when he latched onto a guillotine choke in response to a Rocha takedown attempt that took the pair out of bounds. Through the closing minutes of the match, Rocha visibly complained as Marinho skirted the edges of the mat, forcing numerous re-sets. The referee ultimately awarded Rocha two points for Marinho’s passivity, but it was too little too late as Marinho won by a score of 4-2.

In the first round of the absolute division, Marinho defeated Brian Giorgio, advancing him to the semifinals where he would face 2019 no-gi absolute division champion Victor Hugo. Giving up substantial size to the ultra-heavyweight, Marinho attacked fearlessly early, attacking a heel hook to earn an advantage in the opening minute. That advantage would be all Marinho would need, as he would successfully defend Hugo’s sweep and takedown attempts for the remainder of the match.

The finals of the absolute division saw Marinho take on ADCC champion and ultra-heavyweight champion Roberto “Cyborg” Abreu. With neither man willing to sit guard and neither able to secure a takedown, the match took place entirely on the feet, both grapplers jockeying for position. Although Abreu seemed to be the more aggressive competitor in the final minutes, it was Marinho’s activity early that earned him the referee decision to break a 0-0 tie and the absolute division world championship.