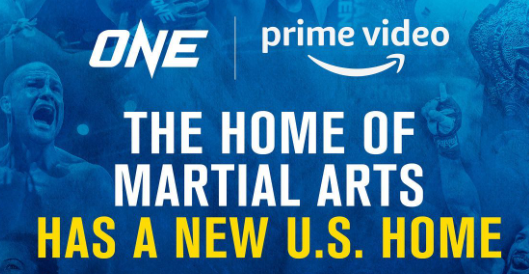 Singapore-based martial arts promotion ONE Championship has signed a multi-year broadcast deal with Amazon, according to a press release from ONE and Prime Video. Under the agreement, Prime Video will air 12 live ONE Championship events every year, with the first event announced later this year.

Prime Video subscribers in the USA and Canada will have full access to these events, which often feature a variety of combat sports contests, including MMA and submission grappling.

“As the world’s largest martial arts organization, we believe our collaboration with Prime Video will allow us to reach a wider North American audience that is hungry for an authentic and differentiated product you simply cannot get with any other organization. We look forward to showcasing the absolute greatest martial artists on the planet, right here in the ONE Circle and on Prime Video,” said ONE Championship chairman and CEO Chatri Sityodtong.

Of note to grappling and Brazilian jiu-jitsu fans, ONE Championship has recently invested in building its roster of top-tier submission grapplers, including elite competitors like Andre Galvao, Danielle Kelly, Mikey Musumeci, and Tye and Kade Ruotolo. On May 20, Tye Ruotolo will take on ADCC bronze medalist and recent ONE MMA title challenger Garry Tonon, while Kade Ruotolo will face MMA grappling specialist Shinya Aoki.