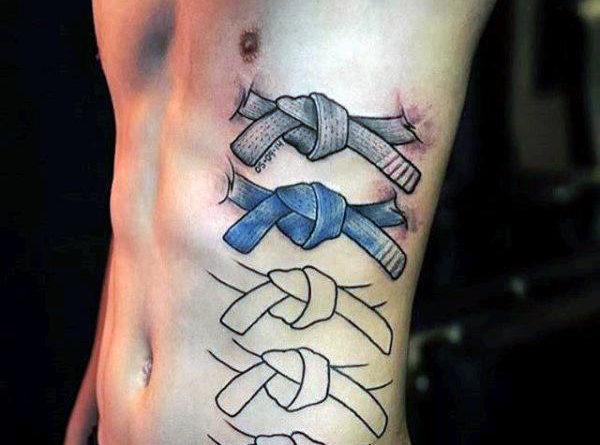 As you progress through the BJJ belts you’ll meet many white belts who have no problem making it known that they’re chasing that blue belt. It’s not uncommon for people to complain about the speed they get promoted at or compare themselves to their teammates or friends in other gyms. They even make a big deal over stripes. (Stripes!)

“Why don’t I have my blue belt yet? I’m tapping blue belts out all the time!”

“Why did they get their blue belt and I didn’t? We’ve been training the same amount of time!”

Usually upper belts will respond by telling them that “BJJ belts don’t matter.”

Sure, dude. Easy for you to say.

There is some hypocrisy in saying that the belts don’t matter at all. If they didn’t, we wouldn’t have a belt system, would we?

Try and find anyone who will tell you they felt nothing when they got promoted. Or that they aren’t looking forward to the next belt at least a little bit. You’ll soon realise how much value people do place in the belt system.

Take a look at how big of a deal everyone makes when someone gets promoted to black belt. Or how much pride a lot of people take in how long it takes to get to black belt. The Jiu Jitsu community clearly cares about belts.

What BJJ Belts Actually Are

The truth, as always, is subtle. Yes, BJJ belts matter, but not in the way you think.

Belts are representative of skill, but not objectively. There is no universal standard for what it means to be a blue, purple, or brown belt, let alone the huge range of skills at black and white. What one coach or team might claim a blue belt should know, another might not expect until purple.

Then you have the goals of the student. It is sort of an open secret that there are effectively two belt systems: competitor and hobbyist. You can call it sandbagging, but the practical reality is that students who make competition a goal will have more expected from them.

Their technique needs to be sharper and more complete before they get promoted. For a hobbyist, how well they would do in competition is not such a big factor for ranking. If their overall game has some holes that could be exploited in a serious setting, the coach might not care as much.

How You Should Look At Belts

This is just part of a bigger truth of ranking in BJJ: your belt is just a subjective assessment of your skill by your coach. That doesn’t mean that belts are pointless. But it doesn’t mean you should care about them above all else.

If you get promoted to blue belt, it means that your coach, someone who’s opinion on Jiu Jitsu you presumably respect, thinks that you have hit a certain milestone. What that milestone exactly is depends both on the coach and the student. So don’t compare yourself to other people in your gym or other gyms in terms of ranking. No two people are ever the same in their goals, work ethic and consistency.

Above all, don’t get fixated on the belt. It is just one bit of outside feedback about your Jiu Jitsu. Ask your coaches and teammates about your technique instead. Have them critique you and help you get better. And if one day your coach ties a new belt around your waist, accept the compliment. Then get back on the mat and keep getting better.