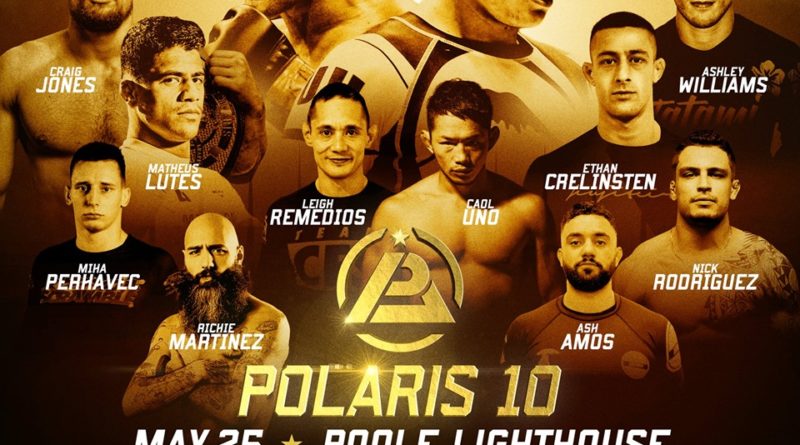 Polaris is putting on its 10th installment this Saturday. One of the premier shows from the submission grappling world, this gold standard event promises to be bigger and better than ever. Here we have three exciting title match ups, drawing competitors from all over the globe. Featuring some of the biggest names in the sport, as well as some of the most exciting, up-and-coming prospects. In this article we will break down this huge event.

Kicking off the main card we have Polaris veteran Ash Amos against newcomer Nick Rodriguez. Amos last faced off against leg lock specialist Ed Ingamells at Polaris 9 – keeping him on the back foot with powerful guard passing and smashing top pressure, the Welshman took the decision. Rodriguez will be no walk in the park for Amos. Even though he has only been training BJJ for a year, this monster of a man has a great wrestling pedigree and took gold in the ADCC west coast trials. The takedown advantage will be with Nick, the experience of the submission game with Ash.

Richie ‘Boogyman’ Martinez will be taking on Miha Perhavec in the middleweight division. One of the stars of 10th Planet and one of the most recognisable faces in the sport, Richie has a dangerous guard and is a master of the D’Arce. Miha is the favourite going into this, having finished every one of his opponents at Polaris with a savage leg lock. The Slovenian has travelled the world looking for training partners and gyms – twice – including visiting the blue basement, so expect the leg attacks to be as sharp as ever. This will be an exciting match which I doubt will go the distance.

Caol Uno has flown all the way from Japan to face off against the Englishman Leigh Remedios. Uno is a legend in MMA, former UFC title contender and siver medalist at ADCC. Caol last appeared on Polaris 5 against Vitor ‘Shaolin’ Riberio, and was meant to be facing off against  Bradd Pickett, who is now replaced with fellow UFC veteran Remedios. Leigh has not stepped onto the competition mats for some time, but has founded one of the best submission grappling camps in England and will be bringing the fight to Uno.

The first title fight of the night, Ash Williams faces Ethan Crelinsten for the inaugual lightweight title. Ash Williams has some big names under his belt, including Masakazu Imanari, Jay Butler, and Ben Eddy. Originally meant to face off against Nicky Ryan for the featherweight title, he was forced off the card due to injury. Now at lightweight, this could be his chance to take a belt. Another Renzo Gracie student, Ethan Crelinsten’s last appearance at Polaris had him win by arm bar against Tom Haplin. He is also a student of Firas Zahabi, and I think anyone with such a set of coaches is an intimidating prospect.

The co-main event, this time at middleweight, sees champ Craig Jones vs Brazilian Matheus Lutes. Jones is one of the most popular grapplers in the world right now, and arguably the pound for pound greatest. He is also at the forefront of the leglock game and is the most impressive submission artist ever to come out of Oz – there’s a reason he’s the champ, and a colossal favourite. Matheus Lutes, brown belt under Marcello Garcia, is an extremely active and successful competitor, with appearances on Kasai, Spyder Championship and many more. Lutes is going to have to strategise, deny the leg entanglements, and make sure Jones can’t impose his game. Does he have what it takes to steal the belt?

And then we get to the main event. Prodigy Nicky Ryan faces UFC veteran Urijah Faber for the featherweight title. Younger brother of superstar Gordon Ryan, the young champion may soon eclipse his brothers achievements in the submission grappling world. For Faber this would mark a significant stepping stone in his submission grappling career, since retiring from the MMA scene two years ago. Expect the strength advantage to be heavily in Urijahs favour against the younger man. Ryan will be sitting back to guard, working for leg locks and back attacks, while Faber works his top pressure and guillotine game.

You can bet on Polaris 10 here.