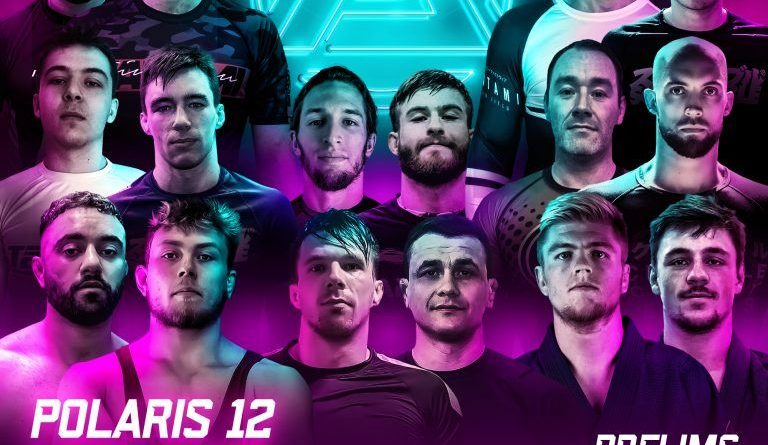 Polaris 12 comes to Newport, South Wales on the 30th November with a stacked card of excellent fights. This is coming hot on the heels of a fantastic weekend featuring Combat Jiu Jitsu, the Spyder Invitational and Fight 2 Win 133. After a weekend like that and with Luke Rockhold and Nick Rodriguez headlining Polaris 12, several of the undercard’s matches are flying under the radar. Here we’ll dissect some of the best hidden gems on the card ahead of our full main card preview.

Both of these fighters are no stranger to the Polaris stage. Amos has gone 2-1 with his only loss coming against the man in the main event, Nick Rodriguez, in the match of the night at Polaris 10. Amos showed great wrestling against Rodriguez and has the ability to push the pace for the full round-time. Vosgrone has equally impressive cardio for a bigger man and has focused more on leg attacks in his two decision victories over Lewis Long and Halldor Logi Valsson.

This match could swing wildly either way and should depend entirely on how each man fares in the other’s wheelhouse. If Vosgrone can’t keep up with Amos’ wrestling then he could be in for a long night, likewise, if Amos gets sucked into defending leg attacks then he could find whole periods of the match going in Vosgrone’s favor.

O’Flanagan has split results in Polaris by beating Tom Caughey by Ankle Lock and losing to Tarik Hopstock, also by Ankle Lock. He’s also had several fantastic matches with recent ADCC competitor, Ross Nicholls, and won double gold at NAGA. He’s a relentless leglock specialist who’s got a solid stand-up game, owing to his Judo background. Skinner comes all the way from Australia and has only had one match back at Polaris 10, beating Kamil Wilk by Footlock. Coming from Absolute MMA, it’s no surprise that Skinner has a superb leglock game himself.

There’s almost no chance that this match doesn’t end up being a frantic battle. Given that both fighters are going to be hunting for leglocks straight from the bell, it’s highly unlikely that this match goes the distance. Expect a highlight-reel finish from either O’Flanagan or Skinner in what could be the fight of the night.

Jenkins is currently one of the best kept secrets in Wales and is a fantastic grappler both in and out of the gi. He’s a five-time British champion and a European silver medalist with previous experience at Polaris. He’s 1-0 under the Polaris banner with an impressive Rear-naked choke victory over Harry McKnight back at Polaris 8. His opponent Mathiesen is very well-matched and actually has slightly more experience at the highest levels, having already faced the likes of Lucas Lepri, Adam Wardzinski and JT Torres in competition.

Both fighters like to fight at a high pace and have cardio for days. They’re pretty evenly matched and I can’t see this match ending in a quick finish. Expect to see constant action in a back and forth fight that most likely goes the distance.

For tickets to the upcoming Polaris 12 on 30th November in Newport, South Wales, click here.