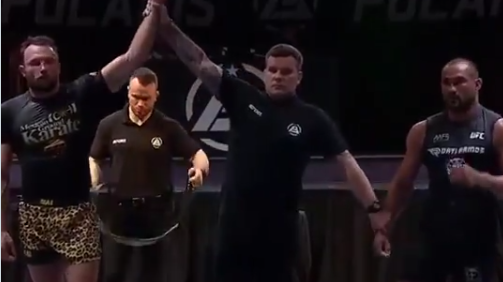 Competing for the first time under the B-Team banner, Jones was visibly frustrated throughout the 10-minute title match against Ramos. For essentially the entire contest, Jones attacked from a seated guard, constantly trying to force Ramos to engage in his guard or create a leg entanglement. Ramos, though, had other plans, as he backed up, avoided engagement, and exploded out of any semblance of control Jones was ever able to secure. The most exciting moment of the match happened when the clock wasn’t running, as Ramos argued with the referee over a starting position on a re-start. Ultimately, it was Jones’ aggression that earned him a clear judges’ decision.

After the match, Jones didn’t hesitate to critique the match, calling it “fucking boring.”

The co-main event told a different story, as Gracie Barra’s Kendall Reusing dominated Venla Luukkonen from start to finish. After Luukkonen opted to play from guard early, Reusing immediately moved to a strong pressure passing position, ultimately passing to mount. From there, Reusing patiently attacked from mount, moving into a triangle and then an armbar to get the tap about midway through the match.

View the full Polaris 17 results below: