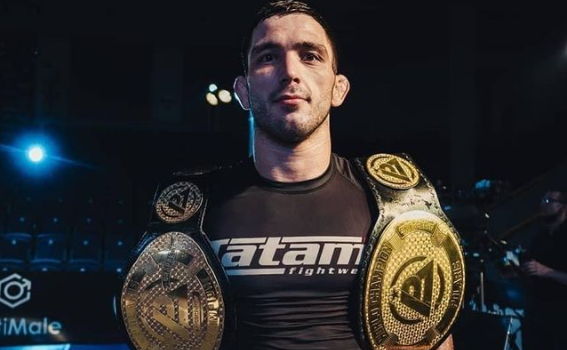 Ashley Williams is one of Europe’s best pound-for-pound no-gi grapplers. A three-division Polaris champion, European Open no-gi champion, and recent ADCC trials winner, Williams has firmly established himself as a force to be reckoned with in the elite no-gi scene.

On November 27 at Polaris 18, Williams will test himself in the gi against one of the best gi competitors of the past decade when he takes on Paulo Miyao. A multiple time Worlds and Pans champion, Miyao might be the most credentialed grappler Williams has ever faced — and that’s exactly why Williams is looking forward to competing against him.

“I’ve actually wanted to have a match with [Miyao] since I was a blue or purple belt,” Williams told Grappling Insider. “Because I know him, he’s brilliant, he’s so good at jiu-jitsu. I was literally watching his matches to try and improve my own jiu-jitsu back when he was winning everything, and I thought one day I’ll be on the mat and I’ll face that guy. It might not go well, but I will compete against him and feel that level.”

Of course, much has changed for Williams since he was a blue or purple belt. He started jiu-jitsu at 15, promptly quitting every other sport to focus all of his energy on his budding passion. Williams competed as often as possible through school and university, rising quickly through the ranks.

“I got my black belt when I was 22. Which, back then, was pretty exceptional for the UK because the UK didn’t have many black belts at all, and certainly not many young black belts who were competitors. There were only a handful of us. So I was kinda like, ‘I’m pretty good at this jiu-jitsu stuff, I should probably give it a go and have a little run of it.'”

Williams did have a healthy run of it, traveling the world to compete in and often win IBJJF competitions. In 2016, he was invited to compete at the Eddie Bravo Invitational. And although he would lose his first match at that competition, the experience turned him onto the idea of professional grappling — being paid to compete rather than the other way around.

Since then, Williams has largely competed in professional no-gi and submission-only shows, including Polaris, Kasai Pro, and Grapplefest. He’s secured wins over the likes of Richard Alarcon, Ethan Crelinsten, and Masakazu Imanari.

Despite all of his success in no-gi competition, Williams will soon put on the gi against Miyao. According to Williams, he has little, if anything, to lose.

“I feel like I haven’t been in a win-win situation for a while when I’m competing,” he said. “I always feel like I’m expected to win. And the person I’m competing against has always got more to gain from the match than I have… The situation with Paulo in the gi, I’ve got everything to gain. If I put on a good performance, even if I lose, that’s gonna be fantastic. Everyone will respect my jiu-jitsu so much just from having a real tough, tight contest with Paulo. As long as he doesn’t blow me off the mat, which I don’t believe he will, I feel like it’s a win win.”

Although Williams is just weeks removed from winning the ADCC European Trials and has never lost a match on the Polaris stage (all of which have been no-gi), he does recognize the gap in accomplishments between Miyao and himself. Sharing the stage with Miyao, says Williams, is a reward in itself.

“I view my gi jiu-jitsu as 100 percent adequate. I think it’s very solid. But to be asked to compete against a former world champion in gi, and people actually want to watch that — for me that’s super humbling and it’s a very nice feeling to know that people want and have the belief in me that that’s a reasonable match to be made. On paper, the credentials aren’t there. The credentials aren’t there on paper in terms of this guy doesn’t deserve this match. But the fact that people think I do has really inspired me to go out there and do the job.”

To be clear, Williams is certainly not counting himself out. Yes, Miyao is the much more accomplished competitor. Yes, Miyao has much more experience in the gi. But Williams sees one key advantage he holds over Miyao.

“I feel like the biggest difference between me and Paulo right now might be our desire to win at this level,” he said.

Miyao is just 30-years old but won his first world championship six years ago. He has openly discussed retiring from competition. And although he earned gold at the 2021 no-gi Pans and silver at no-gi Worlds adult divisions, Miyao has also started to compete in the Masters division.

“I could be wrong, but I think he does Masters for the fun of competing rather than to prove he’s the best. But obviously I still think I’m at the point in my life where I’m still trying to prove to everyone how good I am. My prep, my discipline and stuff, it reflects that… He’s incredible and obviously back in the day he was hungry chasing world titles, chasing ADCC titles. But when you take that step backwards and say I’m gonna compete in Masters, I’m just gonna go out and enjoy competition, I don’t know if you still got that same hunger in you that maybe an up-and-coming athlete would have.”

As for the match itself, Williams recognizes the threat of Miyao’s legendary berimbolo and back-taking game, but is confident that his own high-paced, aggressive style translates well to the gi and will translate well against Miyao.

“I’m gonna bring the game I usually bring which is high-paced, heavy pressure on top. A lot of disruption a lot of trying to be in his face.”

And while Williams has a healthy respect for Miyao’s berimbolo, he believes his defense will hold up. Because for as much success as Miyao was able to have with the technique early in his career, the jiu-jitsu metagame has evolved to counter the berimbolo.

“One thing I will say about his berimbolo game. Although he is one of the best in the world at doing it, similar to leg locks a few years back — the guys who were leg locking — yeah they were fantastic but what made the biggest gap, I believe, is that people weren’t very defensively sound with leg locks. So it made the gap even way bigger. When Miyao was bolo’ing people, I think some people literally didn’t know what the other person was doing. I don’t think they knew what bolo was and therefore the defensive capabilities weren’t as strong as they are these days.”

Avoiding the berimbolo is only one part of Williams’ gameplan, which involves steady, aggressive guard passing.

“I’m 100 percent gonna have to put myself on the test, on the chopping block to see how my bolo defense does against somebody like Paulo, but I do believe it’s gonna be adequate or sufficient enough to keep him off my back and keep him on his back. I know if he sweeps me I pretty much can stand back up, and he’s gonna have to re-pull because I don’t think he’s gonna wrestle me. I probably have a size advantage so I’m gonna try to utilize that for 10 minutes and push the pace high and just keep pressure on him for the whole thing. Obviously passing one of the Miyao’s guards seems like an impossible thing. In my opinion, if anyone’s gonna do it, I could, so I’m very much looking forward to that opportunity.”

How to watch: Polaris 18 takes place on Saturday, November 27 and will air live on UFC Fightpass (subscription required).