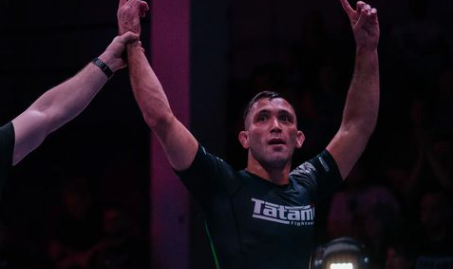 On Saturday, March 26, top UK-based promotion Polaris returned to action with a card headlined by Magid Hage and recent ADCC Trials winner Roberto Jimenez. The event also featured a pair of Polaris title bouts, as both Ash Williams and Kendall Reusing were able to retain their belts.

Like all Polaris events, each match was contested under a submission-only ruleset. In the event no submission occurs during regulation, mat-side judges award a victor.

Fresh off a first-place finish at the ADCC South American Trials, Jimenez needed just over to finish Hage. With Jimenez in half-guard top, Hage used a classic John Wayne sweep to gain top position, but the advantage lasted just a moment as Jimenez was able to snake around to Hage’s back. From there, Jimenez used his trademark hand-trapping to secure a clean rear-naked choke.

And in the co-main event, openweight champion Kendall Reusing and Amanda Leve seemed well on their way to a high-paced, competitive scrap. After some close exchanges on the feet, Level dropped back to a guillotine, which Reusing escaped. Moments later, in a scramble, Leve injured her ankle, forcing a stop to the match as Reusing was awarded the win by injury forfeiture.

Polaris triple-champion Ash Williams also impressed with a methodical but decisive victory over dangerous leg locker Jack Sear. Sear showed off incredible flexibility and dexterity throughout the match, but it was Williams’ constant pressure passing that earned him the victory, as he was able to achieve dominant position on numerous occasions.

View the full Polaris 19 main card results and highlights below.