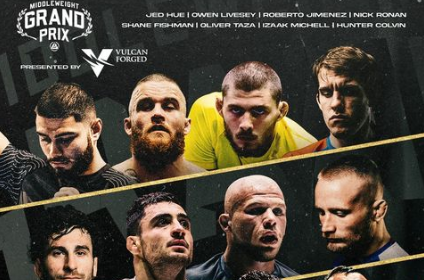 Polaris 22 goes down on Saturday, November 5 and will feature an eight-man grand prix to crown a new middleweight champion.

Below is the current line-up for the Middleweight Grand Prix at Polaris 22:

The field is loaded with top talent, including four recent ADCC veterans, and no clear-cut favorite.

Alan Sanchez is a 10th Planet black belt that has been a fixture of the elite no-gi scene for a couple of years, but recently enjoyed the best performance of his career at EBI 19 where he captured gold, defeating fellow Polaris competitor Oliver Taza in the final.

Taza is a two-time ADCC Trials winner and one of the most experienced grapplers in the tournament. He also might be the best leg locker of the bunch – a skillset he complements well with his ever-evolving wrestling and top game.

Speaking of leg lockers, Jed Hue is one of the best in the world. The 25-year old black belt is coming off a lightning-fast leg lock win over UFC veteran Paul Craig at Polaris 21.

Poland’s Mateusz Szczecinski is another grappler that will attack the legs early and often. He is a straight footlock specialist – a move he used to submit William Tackett at the ADCC World Championships.

Known for his back-takes and non-stop submission attack, ADCC Trials winner Roberto Jimenez might have the game that is best suited to the Polaris submission-only ruleset. Tall and lanky, the Ecuadorian can attack the back from seemingly any position and possesses an endless gas tank.

Fan-favorite Owen Livesey, another ADCC veteran, is quickly becoming one of the UK’s best and most active competitors. He’ll look to implement his top-notch judo and wrestling skills as he tries to stifle the attacks of his more submission-oriented opponents.

Hunter Colvin is an ADCC Trials silver medalist and might be the field’s dark horse. He is an excellent takedown artist but with elite skills in all areas, including leg locks, guard passing, and guard.

Finally, Shane Fishman is one of Europe’s top competitors, and earned his way into the Grand Prix by winning the Polaris Contenders.