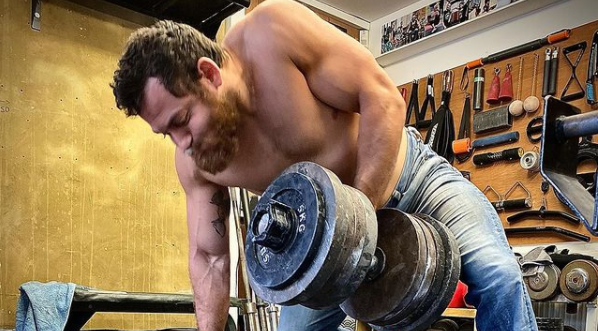 Dan Strauss is a bit of a renaissance man. A podcaster, combat sports commentator, BJJ black belt, and aficionado in the manly art of traditional strength training, Strauss returns to elite-level jiu-jitsu competition this weekend at Polaris Squads: Team USA vs. Team UK/Ireland. A Polaris veteran, this will be Strauss’ first time appearing in a Squads competition, and he’ll be facing some of the best grapplers on the planet, including Geo and Richie Martinez, Roberto Jimenez, and Jon Blank. Polaris Squads is an opportunity for the UK’s best grapplers, including Strauss, to showcase their skills against such high-profile and accomplished competitors.

After training for 15 years, seven of which as a black belt, Strauss has witnessed first-hand the evolution of jiu-jitsu in the UK.

“Obviously the sport has grown so much in the world, but also in the UK where I’m from, it’s had a massive growth,” Strauss told Grappling Insider in an exclusive interview. “We’re kind of about 5-10 years behind the States. When I started training, we didn’t have a single UK black belt and now we have literally hundreds.”

The UK-based Polaris is one of the biggest grappling promotions in the world, but Strauss recalls a time in the relatively recent past when jiu-jitsu competitions were a far cry from the professionally produced and broadcast international affairs that they are now.

“My first competition was one mat in the back of a gentlemen’s club. People smoking outside and drinking inside, and it was just a back room with a one mat in it. There were no belts. It was just a newaza competition, a ground fighting tournament. You didn’t have to specify any belt because there were so few blue belts around.”

Along with the growth of jiu-jitsu in the UK, Strauss has also been a witness to the evolution of jiu-jitsu as a whole over the past decade. He watched leg locks become the dominant method of attack in submission-only no-gi competition, and now he’s watching wrestling move to the forefront of the jiu-jitsu metagame. And while Strauss is proud of the strides forward UK jiu-jitsu has taken in the past several years, he sees the United States as ahead of the curve in terms of the current trends in grappling.

“Obviously a big difference between the UK and the US, even though we have so many styles of wrestling that were born in the UK, such as catch wrestling… we have absolutely no wrestling in the UK,” he said. “But in the US it’s a massive thing… so we’re definitely behind with that, as well, but quite a few people are getting into it more and seeing improvements in that area as well.”

One of Strauss’ most memorable matches is his draw against AJ Agazarm at Polaris 2. That match was 15-minutes long and saw its fair share of histrionics and taunting from both Strauss and Agazarm. Perhaps because of that match, Strauss has garnered the reputation of a playful, even patient grappler. According to Strauss, though, that couldn’t be further from the truth, and the Polaris Squads five-minute rounds will allow him to compete how he trains.

Strauss hasn’t competed in five-minute rounds since he was a white belt, and is excited to showcase his jiu-jitsu without the need to pace himself.

“An issue I’ve always had is over-pacing myself and basically trying to play a different game on the day than I do in training, and those five-minute rounds pretty much let me go for it from the offset… not having to worry about pacing myself…I’m looking forward to being able to bring a much higher pace and be able to go a five-minute pace as opposed to a ten or fifteen minute pace.”

“I should be proof that anyone can look how I look and do what I do with hard work. Absolutely nothing was given to me in that respect.”

As much as he’s accomplished in jiu-jitsu, Strauss might be more well known for his feats of strength and traditional strongman training. From ripping apart decks of cards, to lifting enormous stones, to juggling weighted steel balls, Strauss’ Instagram page is filled with what appears to be unorthodox strength training.

As a teenager training alongside adults, Strauss was motivated to gain strength and size. That brought him to the book “Dinosaur Training,” by Brooks Kubik, a guide that Strauss calls the “bible” of his type of strength training.

“The ethos there is essentially: don’t join a gym, you don’t want to be there with all those shiny whites. It’s all rubbish. You got to be a garage gorilla,” Strauss explained. “You got to get your thick barbell, you gotta look at what the old time strong men were doing, true strength, pre-steroid era. That was the ethos that I carried with myself and I still to this day since I read that book years ago… For so many people it’s so obscure and unorthodox and weird, but when I go into a gym and I see people doing what most people would consider very basic exercises, I look at them and think they’re unorthodox, and strange, and weird.”

Given his reputation as one of the strongest men in jiu-jitsu, it may come as a surprise to learn that Strauss was a small, unathletic child that has never been blessed with natural strength.

“I was about 110, 120 pounds when I first started training, and a lot of people struggle to believe that,” Strauss said, doing some quick kilograms to pounds conversions.

“I do like to post photos of me from my childhood sometimes just to show people not only was I not big as a kid or muscular in any way, I was really bad at sports. I was never good at any sport until I started grappling. We used to do fitness tests and I’d come very low down. We used to do strength tests and I wouldn’t do particularly well. I don’t have any background prior to grappling, I don’t have any background in any sport whatsoever and it’s a massive disadvantage… I’m fighting against that the entire time… I should be proof that anyone can look how I look and do what I do with hard work. Absolutely nothing was given to me in that respect.”

Strauss not only preaches a blue-collar work ethic, he wears it. Strauss’ typical strength training outfit consists of classic denim blue jeans and occasionally, heavy boots (shirt optional). It’s a look that Strauss admits has become part of his brand.

“I cannot lift without my denim now,” he said. “Honestly. It’s got to that point, it almost started out as a bit of a joke… it half started off as a joke. Now there are somethings I cannot absolutely not do in my jeans. If I was to put on board shorts or short shorts or something and do squats, it’s gonna feel really really wrong to me. Genuinely.”

Strauss’ response to that question is a perfect microcosm of his personality: partly joking, but always with a healthy respect for history and hard work.

“There’s many reasons. One: you’re always ready. You’re always ready in the streets. If it kicks off you’re ready to go. If you’re training in what you’re usually wearing then you’re always ready to go. I think if I worked in an office, who knows? Maybe I’d be working out in dress shoes and trousers, and a shirt and a tie… There are some powerful materials out there, but I definitely say that denim is up there as one of the most powerful materials known to man. It’s rugged. It is worn by people who do rugged jobs. And when you put it on you can absorb some of that history…”