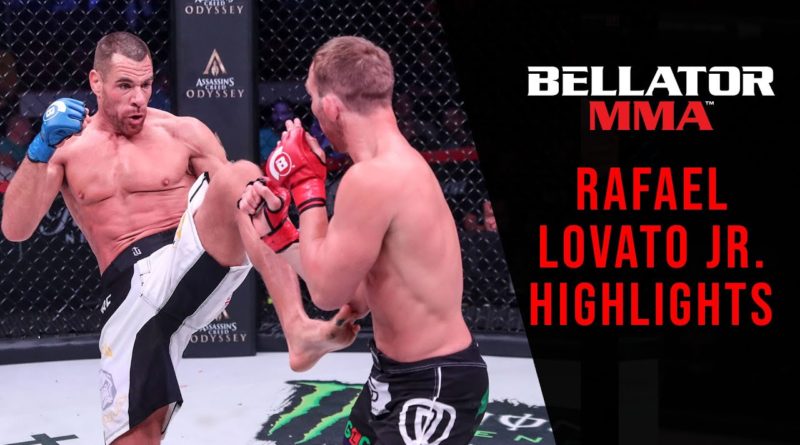 Our next MMA preview takes us to Bellator London, where we have BJJ legend Rafael Lovato Jr facing off against kickboxing veteran Gegard Mousasi on Saturday night. Lovato has finished eight of his nine fights, the latest against John Salter via RNC, while Mousasi is coming off his first title defence, a dominating victory over Rory Macdonald. This is quite reminiscent of our last Bellator event, with an experienced ex-UFC fighter facing off against a newcomer Jiu-Jitero for a Bellator belt. Will this one go the same way, or will Lovato score an upset?

Rafael Lovato Jr, is blackbelt under Carlos Machado and a multiple time BJJ world champion. Lovato is the current number one contender for the Bellator middleweight title. He began his MMA career in September 2014 in Legacy Fighting Championship, moving to Bellator in 2017, where he has finished four of his five last opponents, bringing his record to 9-0.

Rafael Lovato is a guard master. His ability to maintain the position, stop damage, and mount offence is fantastic, and one of his best weapons. Against wrestlers this is a huge benefit – though they can control where the fight goes, they really don’t want it to go to the ground with Lovato on the bottom. This aggressive guard was best shown against Gerald Harris, with a rapid, slick, and truly impressive arm bar. He’s also a slick back taker, with RNC wins against John Salter and Mike Rhodes in Bellator – the positional control he has demonstrated in these positions is excellent.

That said, he has shown difficulty in maintaining top control and holding down his opponent. Rafael has shown a far more top-pressure based game in his BJJ matches and has not completely translated it. This could be due to two reasons; firstly, his takedowns may be too gi-centric and therefore too few in MMA, so he more rarely gets the top position in the cage. Secondly, against powerful wrestlers and strikers that want to be on the feet, it’s a very different skill than needed in BJJ. His most stable positions on the ground are his guard and his back control, and they are much harder to escape.

Rafael’s takedowns are few and far between. I think he has initiated two takedowns in his last five fights, one being a standing back take, dragging Rhodes to the floor, and the other off catching Salter’s kick. Most of his takedowns come from reversals after creating chaos in the striking, but this can cause some pretty obvious weaknesses. Other Jiu-Jitero get around this issue by striking into the clinch and using this to initiate trips and reaps (just look at Neiman Gracie) but this isn’t a big part of Lovato’s game either. In fact, the clinch seems to be a weaker spot. Versus Honeycott he struggled to escape being tied up along the fence, and he has rarely mounted offence from here. This is probably one of the areas that needs the most work, and I think being able to control the clinch and using it to get to the back would be the biggest accelerator to Lovato’s game.

Aggressively, Lovato has looked good. His strikes are powerful, his hands aren’t to be sniffed at, and he’s definitely creative with flying knees and unorthodox techniques. The most impressive things for me are his head-kicks, which scored him a thirteen second victory against Hackman. The dangerous guard allows Lovato to throw these attacks without fear of the takedown, and this really allows his kickboxing to flourish. This might be his best chance to take Mousasi to the ground, capitalizing off a stunning blow.

Rafael has looked very flat footed in the past, but I liked the improvements in his match against Salter. He was much faster exiting dangerous situations, and did so at angles to prevent crashing into the walls. In general he showed good cage awareness with his circling, and rarely found himself trapped despite moving backwards for much of the fight. His ring craft has always looked good – often a deficit with Jiu Jitero – which bodes well if he needs to avoid the clinch game. Being heavy on the feet also makes him vulnerable to the leg kick – again, going back to Salter, he did not defend the leg strikes once. If Mousasi exploits this then Lovato’s movement might suffer. The other result is that he tends to duck out to the right when under fire, overcompensating for his slow footwork, and I would worry that Mousasi might target this habit.

Mousasi is the reigning, defending Bellator middleweight champion, and a true veteran of the sport. He has trained in boxing, judo, Dutch kickboxing, and debuted professionally as an MMA fighter way back in 2003. He has fought in numerous organizations, including Pride, Dream, the UFC, and moved to Bellator in 2017, taking the title in his second fight. His record stands at 45-6-2, with twenty six knockouts and twelve submission wins.

Mousasi is a great MMA grappler. Aggressively he’s got powerful takedowns off the cage, utilizing them well against Santos and Hall, and has vicious ground and pound as well as a good number of submission wins. That said, he’s not a world champion BJJ player, and he’s not going to be on Lovato’s level on the ground. What might be more important is the defence, which he really showed off against Jacare. Fine, he lost by guillotine in the end, but he defended several attacks including a scary looking kimura extremely well. He’s not impossible to submit, and if anyone can do it Lovato can, but Mousasi will make him work for it.

Gegard has shown some real holes in his takedown defence in the past – it was a long while ago, but he conceded eleven of fourteen attempted takedowns in his fight against King Mo, and though he defended a couple of shots against Ronaldo Souza he really struggled once the Jiu-Jitero got him against the cage. Despite his experience kickboxing, Gegard doesn’t have the most aggressive or powerful clinch game. He rarely enters the position himself, and I doubt he will change that on Saturday against a world class grappler.

Mousasi is primarily a boxer when it comes to striking, and he is very, very quick – much quicker than Rafael, I’m afraid to say. He’s also got the power in his hands to score a knockout, hence more than half his fights going that way. His kicking game is quite limited, only throwing one or two to the head in his last five fights, and not many more to the body. Leg kicks are usually what he goes for, and landed many against Urijah Hall in their second fight, which may prove to be a useful tool against his heavy footed opponent.

Like Lovato, Mousasi moves intelligently, but is not the nimblest. He cuts the cage well and keeps his opponent backing up, but isn’t the quickest to exit after making an attack. Mousasi is definitely the faster moving of the two, but expect to see them trade strikes throughout the fight. He’s no genius at distance control like Max Holloway, and I doubt he will have the ability to prevent engagements all night.

I’m not sure this fight is even going to end up on the ground, unless it is right towards the end and brings the finish. The last thing Mousasi wants to do is end up in the guard of Lovato, and Rafael has only initiated two takedowns in his past five fights. The best way would be to initiate the clinch, but as said that’s not a position either of them like. Unless one of these men has a real change in strategy they’re staying standing, so expect a kickboxing match. Lovato’s difficulty in holding his opponents down means Mousasi will not be afraid to throw leg kicks and slow down the Jiu-Jitero further, which could put him in real danger, especially if he continues to duck off to the right. Lovato has had a great chin though, and I’ve yet to see him wobbled – I wonder if the best option for him is to play aggressive. Despite the vicious ground and pound of Mousasi, Lovato is unlikely to fear throwing the head-kick. If he manages to stun Mousasi and force the Dutchman to go for the takedown, that may be the opening he needs. If Mousasi ends up in Lovato’s guard that’s probably one of the most dangerous spots for him. The best bet for Lovato is to force Mousasi into the takedown, get on the Dutchman’s back, and finish the fight from there.