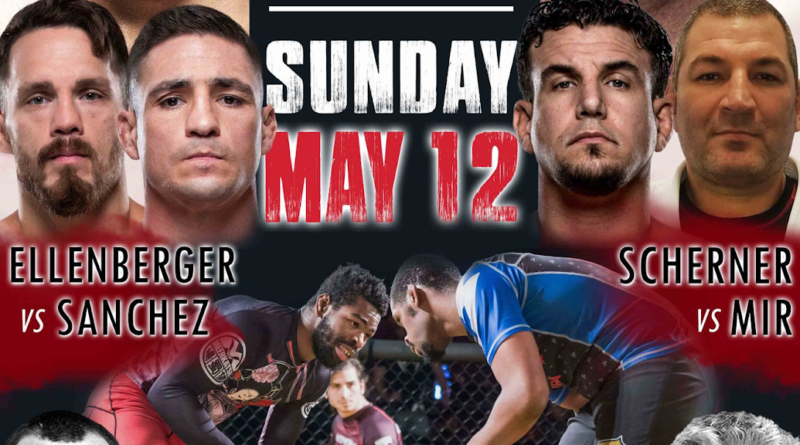 Chael Sonnen’s Submission Underground promises a star-studded event this Sunday, May 12th. Five bouts are scheduled for the main card, each offering its own promise of a tough match.

The up-and-coming organization has had quite a bit of success getting big names into its cage. Notably, Jon Jones won the main event over Dan Henderson at SUG 2. SUG also aims to shake things up a bit, introducing tag team jiujitsu. There will be 4+ tag team jiu jitsu matches featuring black belts, Invicta fighters, a SUG champion, and the first ever couples tag team match.

First on the main card, Gilbert Melendez faces challenger Pat Healy. The former MMA fighter and Cesar Gracie Jiu Jitsu team member seeks to gain some momentum in the grappling competition circuit after a four-fight MMA lose streak. Melendez last fought professionally in 2017. He had been slated to face Healy in late 2012 and early 2013, but both times the fights were cancelled (Melendez was injured).

Healy may also have a bit of rust, as his last professional fight was in early 2018. Healy had announced his retirement from MMA, acknowledging that he could not be competitive at a high level any longer. He promised to focus on his BJJ and “finally getting [his] BJJ black belt”. A win over Melendez would be a significant step forward.

Next, Dennis Hallman will take on the ever-popular Craig Jones. Hallman is coming off a string of six MMA losses, with no fights since 2015. Craig Jones is the first on the main card to be busy lately, with four professional matches since the beginning of 2019. He is slated to face Matheus Lutes at Polaris 10, where he has quickly become a rising star. Jones has defeated Jake Shields to become middleweight champ, then moved up to light heavyweight and claimed that title as well. With ADCC 2019 in sight, many are backing him as the 88KG favorite.

If Hallman pulls off this win, it’ll be a big one for his career, while a win for Jones may be just another notch in his belt.

Frank Mir returns to face Fabiano Scherner. Mir has been active in Bellator, having taken part in the recent Heavyweight Grand Prix. Unfortunately, Mir did not have a very good showing and is coming off of five straight losses, four of which were MMA and one of which was a grappling bout.

Fighting out of Rio de Janeiro, Fabiano Scherner has had a mixed record, currently 11-11-0 in MMA. We’ll see if he can gain an edge with a win over Mir on Sunday.

Ellenberger has had a streak of bad luck, with his last win coming over Matt Brown in 2016. After his most recent loss in August 2018, Ellenberger announced his MMA retirement, but perhaps has a chance to regain popularity, and some momentum in competitive grappling, with a win over Sanchez.

Who doesn’t love Diego Sanchez? The Nightmare, the Dream, Lionheart, whatever he wants to call himself, we’re here for it. Since his win over Kenny Florian in 2005 to claim the title of the first Ultimate Fighter, the oddball fighter has been on our radar. While he does often display explosive knockout power, his jiujitsu is remarkable. Two of his wins on the show came via Rear Naked Choke in the very first round. He also boasts wins over Nick Diaz, Karo Parisyan, Joe Stevens, Takanori Gomi, and Ross Pearson. However, recently, his record has been a bit more spotty, with losses to Matt Brown and Al Iaquinta.

Sanchez’s last two fights have ended in victory. Let’s see if he can keep his momentum with a win over Ellenberger.

While we’re talking about big names, Jake Shields has one of the biggest in grappling. His “American Jiujitsu” has earned him many wins and noticeable style in grappling bouts. Shields will be looking to gain back in the green after a recent loss to Rafael Lovato, Jr. at Polaris 9.

Austin Vanderford ought not to be overlooked; he boasts an undefeated MMA record with several of his wins coming via arm triangle and RNC. His most recent win was in February over Cody Jones at Bellator 215 at 4:49 of Round 1. Vanderford has proven himself dangerous; Shields will have to respect the ability of the younger fighter.

The event will stream live at 3pm PST on UFC Fight Pass.