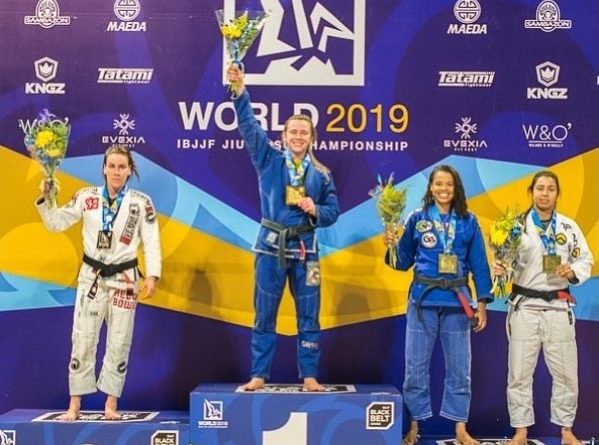 Third Coast Grappling Kumite 7 is the last event of the series that spans four months during a worldwide pandemic. The bracket is comprised of eight female black belts vying for the $10,000 prize. That is a powerful statement for equality in the sport. This is part two of an eight-part series featuring each of the athletes in the bracket. This is Andressa Cintra.

Andressa Mezari Cintra is the 2019 black belt world champion in the IBJJF women’s medium-heavy division. Before earning her black belt, she won gold medals at purple and brown belts at the IBJJF Worlds in 2016 and 2017, respectively. Her first major title, the Brasileiro, came just four months after getting her blue belt in 2013.

Translation: Andressa Cintra “…was born in Campo Mourão, Paraná and started training at a very young age. With the objective of training more and going to college, she moved to Maringá where she trained 3 times a day and at the same time attended a Physical Education college.

From the beginning she stood out in competitions winning the Brazilian CBJJ in his first year of blue belt, a title she won several times in other bands. The young champion moved to Curitiba to live with her mother, always training hard and dedicating herself, was a world champion by IBJJF 3 times, including the absolute world title in 2017, the year she moved to Houston, Texas to train with the then boyfriend and future husband Lucas Valente and Professor Vinícius Draculino.

Already living in the United States, Andressa became a world champion black belt by the IBJJF in 2019, and is on track to be one of the best ever in the sport. One of the most friendly and humble people you can meet outside the mat and one of the most technical, with Jiu Jitsu.

Text Written By: @lucasvalentebjj Thank you Andressa for all your dedication and contribution to our women’s Jiu Jítsu. Gracie Barra is very proud to have an athlete like you on our team.

Born on Aug. 5, 1995, Cintra started taking her first Jiu Jitsu classes at 14. One of the things that struck her was that there were no other girls on the mats. Nowadays she says sometimes she feels that it is her mission to “bring more girls to the mats.” Winning small tournaments as a white and blue belt only motivated her to take her training and diet more seriously. She even managed to convince her mother that Jiu-Jitsu made her life better.

In Lucas Valente, whom she eventually ended up marrying, she says she found the perfect training partner, coach, nutritionist, inspiration and life partner. He was also the catalyst who led to her switching teams. She earned her black belt from her previous instructor, Sebastian Lalli (Checkmat). However, she now trains and teaches with Valente at Gracie Barra Texas. They both thrive under the mentorship and tutelage of the legendary Vinicius “Draculino” Magalhães.

She places a huge value on visualization.

“I like to visualize myself with my hands up, I like to visualize myself getting a submission, getting my opponent down, and winning, of course,” she says. “I respect the way, but if I think I’m not able to win, why am I there? I need to think that I’m the best on that day, the better player, to be able to get it. If I don’t think that, who’s going to think it? It’s my dream. It’s not anyone else’s turn, it’s mine. So I need to have this positive mindset that I can do it.

Motivation And Challenging Yourself

She is easy to motivate, she adds.

“I like to watch successful people like Michael Jordan, Kobe Bryant, Michael Phelps, Ronda Rousey… I like to see those pro athletes, how they think, how they do it… always positive mindset, thinking about always getting better… I like to watch that to make myself get into the game and I want to be the best that I can be. I give one percent better every day. I try new stuff. I like to study.

Every time that she fights, she always looks to try something new, challenging herself to be better. “I want to be the best version of myself, the best that I can be, not comparing me to anyone because their lives are their lives, mine is mine,” she says. “So what I can do with my life, take that one step ahead in my dream, to be the best fighter that I can be.”

Her ultimate goal in Jiu Jitsu is to “be in the IBJFF Hall of Fame.” She is already on her way.