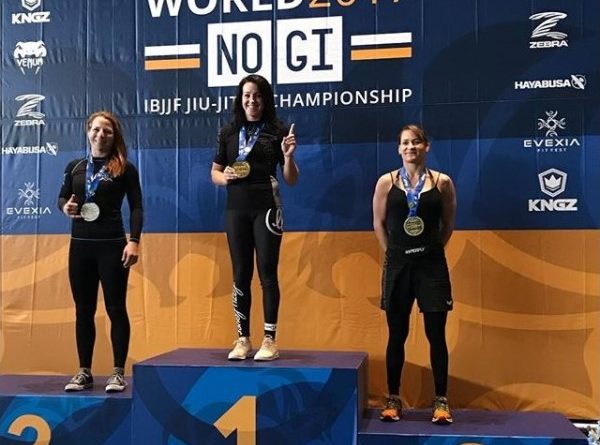 Third Coast Grappling Kumite 7 is the last event of the series that spans four months amidst a worldwide pandemic. The bracket is comprised of eight female black belts vying for the $10,000 prize. That is a powerful statement for equality in the sport. Eight world-class elite competitors showcasing the best of women’s Jiu Jitsu. This is part five of an eight-part series featuring each of the athletes in the bracket. This is Jena Bishop.

Jena Bishop is the 2017 International Brazilian Jiu-Jitsu Federation (IBJJF) World No Gi and Masters Worlds champion at black belt. She has also earned gold medals at American Nationals, Pan Ams, Europeans, and ADCC trials. She has many more titles at the lower belts.

Finding Jiu-Jitsu And Her Rightful Place

Born in February of 1986, Bishop’s first sport was track and field. She took up Jiu Jitsu because of her then boyfriend Tyler Bishop. She earned every belt promotion from her first instructor JW Wright from white to black belt in his Gracie Humaita school in Missouri. Prior to getting her black belt, she won silver at Pan Ams and then her first World title, both at brown belt and in 2013.

The couple moved from St. Louis, Mo. to San Diego, Calif. in 2016 to teach and train with the Gracie Humaita Competition Team. Under the tutelage of the legendary Regis Lebre, the couple flourished. She won major titles at black belt, including No Gi Worlds, Masters Worlds, Pan Ams, American Nationals and the Europeans – all in 2017. She also qualified to go to ADCC by winning the East Coast Trials in 2019.

In 2019, they switched teams to join Alliance San Diego, announcing it with the following post: “Do the right thing — Treat people the right way — Be on the same page.

These are the principles that @jenabishopbjj and I have tried to let govern all of our biggest decisions since we’ve been married. It’s not always easy with subjective criteria like that, but I am very thankful that I have a partner in life that is as reflective and self-critical as myself. Together, we are always trying to evaluate our intentions in every decision we’ve made; especially in jiu jitsu. We are a team and we are always united.

I want to thank @alliancesbjjsandiego for opening their arms and making us feel like family this last month. As I’m sure many of our close friends in Jiu Jitsu have seen, Jena and I are training with Alliance – and our close friend @johnnysd now. Johnny has been a friend for a very long time and I’m really thankful for the type of environment and the welcoming he’s given to us.”

They also answered many questions in this interview.

One of her most impressive feats happened at the 2017 Masters Worlds, where not a single point was scored against her.

In 2009, she married her high school sweetheart, to whom she’s still wedded in marital bliss to this day.