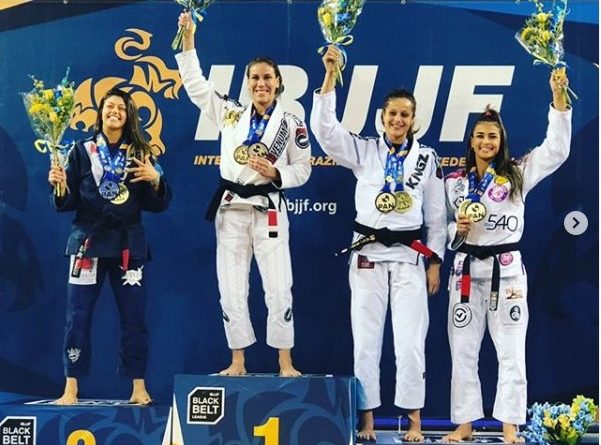 Third Coast Grappling Kumite 7 is the last event of the series that spans four months during a worldwide pandemic. The bracket is comprised of eight female black belts vying for the $10,000 prize. That is a powerful statement for equality in the sport. Eight world-class elite competitors showcasing the best of women’s Jiu Jitsu. This is part three of an eight-part series featuring each of the athletes in the bracket. This is Luiza Monteiro.

Luiza Monteiro is the International Brazilian Jiu-Jitsu Federation (IBJJF) World champion at black belt for 2015 and 2017 (Gi), and in 2012, 2013 and 2014 (No Gi). She earned her black belt in 2010, the same year she placed 2nd in the Pan Ams and 3rd at Worlds, both at brown belt. The legendary Rodrigo Cavaca promoted her to black belt when she was still with the Checkmat team.

Born in November of 1988, Monteiro’s first martial art was Muay Thai, which she started in 2000. Jiu Jitsu came to her life the year after, when her friend invited her to try a class. She was immediately hooked. After receiving her blue belt from her original instructor, she decided that she needed a more challenging environment. She received her purple belt and beyond from different instructors within the Checkmat organization. The other legend of Checkmat, Leo Vieira, promoted her to brown belt.

A year after getting her black belt, she worked with another legendary instructor and leader, Cicero Costha. It was for a social project, Projeto Social Lutando Pelo Bem (“Social Project Fighting for Good”). Her connection to Costha led to a brief stint teaching at Unity BJJ in New York City. However, she came back to work with the project in Brazil.

In 2018, she made another move, this time switching to Atos.

Monteiro is one of the few who has won a gold medal at each of the four IBJJF championship events: Worlds, Pan Ams, European and the Brazilian Nationals (Brasileiro). Besides multiple Worlds, she also has won the Pans five times and the Brasileiro four times. She competes in middleweight and absolute weight divisions.

In June of 2019, she married fellow World champion Gustavo Batista.