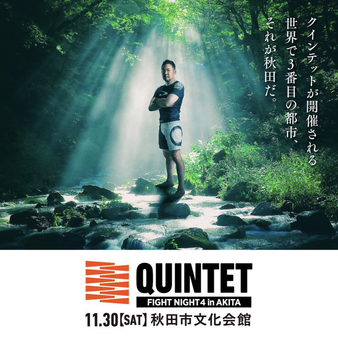 On November 30th, less than two weeks before the momentous Quintet Ultra, four teams faced off at Quintet Fight Night 4 in the Japanese city of Akita. In addition, Haisam Rida took on Kyle Chambers in a traditional match and two Ironman matches took place. This was a new ruleset introduced by Sakuraba for the event, in which the competitors try to submit their opponents as often as possible in a five minute round.

Quintet Fight Night 4 kicked off with Team Carpe Diem and Team K-TOP BJJ. In the first round Tomoyuki Hashimoto and Inseong Jang came to a draw, followed by Sotaro Yamada catching Youngseong Cho in a deep kneebar, only to then tap out his next opponent in beautiful calf slicer/RNC-combination and draw against the third. The final fight also ended in a draw with Team Carpe Diem winning their first bout in a dominant manner.

The second bout was off to a good start when Shutaro Debana caught Ayumu “Gozo” Shioda in an armbar, followed by a draw against Kohei Yasumi. After yet another draw, Yuji Hoshino from Team Sakuraba had to tap out to a tight armbar from Shoki Higuchi. In the final fight MMA legend Daisuke Nakamura submitted Yutaka Saito with a kneebar, after a brief break from action following an eyepoke. Team Sakuraba was victorious and moved on to face Team Carpe Diem in the final.

The match between Rida and Chambers was a clash of styles and a great example of high-level grappling. Chambers brought his fast-paced 10th Planet style but Rida proved to be too much in a superb all-round display. Both competitors negating the strengths of their opponents enough to make it to the judge’s scorecards where Haisam Rida won the bout. We might very well see another high level 10th Planet grappler face him in a future edition of Quintet.

Next up were the trials of a new concept: Two competitors, five minutes and the one with the most submissions wins. The trials had Hideo Tokoro face Minowaman and Kazushi Sakuraba face Takanori Gomi. Minowaman won by a single submission when his opponent crossed his feet when in backmount, leading to the classic footlock we’re all taught not to get caught in. Sakuraba managed to tap Gomi with a nasty armbar after transitioning from a triangle choke, then got caught in a deep guillotine himself. Sakuraba found a last-second victory with a late toehold finish of Gomi.

The final round of fights started with Tomoshige Sera landing a flying armbar and a kneebar for two quick finishes in his first fights, then being eliminated in a draw against Yuji Hoshino. Daisuke Nakamura then survived a deep guillotine by Yaukinari Tamura, eventually threatening a finish of his own with an unconventional arm/shoulder-lock before the match ended in a draw. This left Sotaro Yamada and Yoichi Fukumoto on the mat for what could be the final match. Yamada won by Estima lock/straight ankle lock in under a minute making Team Carpe Diem the winner of Quintet Fight Night 4.

What We Learned From Quintet Fight Night 4

Quintet once again showed that their ruleset makes grappling very entertaining, with Sotaro Yamada and Tomoshige Sera both having impressive performances. The addition of the new ironman matches added some nice flavor to a solid event. They showed immediately that they can make for exciting go-for-broke scenarios as the time limit nears an end. Logically, the ruleset will end in more submissions than a standard fight and in theory, should encourage a higher level of risk-taking.

With Quintet Ultra just around the corner and this time including some of the biggest names in the sport, Quintet really is finishing 2019 strong. This comes after an equally impressive their debut last year. The only way is up for one of the most innovative grappling event on the planet.