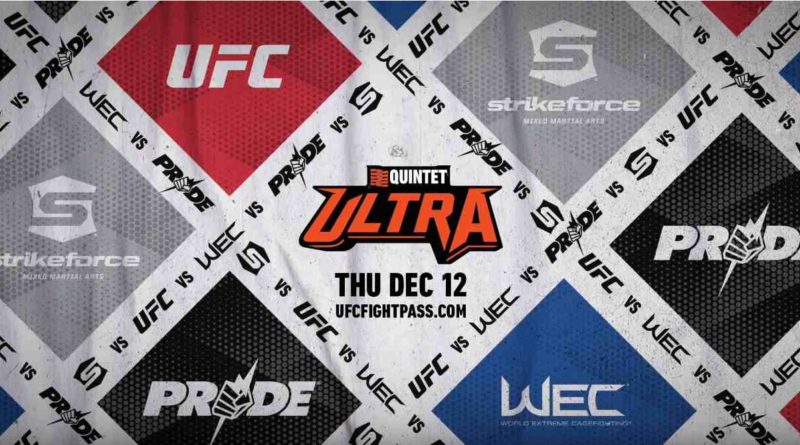 On December 12th, Kazushi Sakuraba’s brainchild, Quintet returns to the United States after their last event being held in Japan. They’re bringing the promotion’s biggest event to date to Las Vegas: Quintet Ultra. This event is an interesting spin on the popular no-gi, submission only, team-based survival tournament. Fighters representing UFC, Pride, WEC and Strikeforce will face off under the this ruleset in what is almost guaranteed to be a blockbuster event after the full team list was recently released.

Quintet Ultra features four five-man teams captained by Kazushi Sakuraba for Pride, Anthony Smith for UFC, Gilbert Melendez for Strikeforce, and Chad Mendes for WEC. Not knowing each team’s running order and the semi-final matchups make a solid prediction very difficult, not to mention the variety of grappling styles as BJJ, Judo, freestyle and catch-wrestling competitors are all present. Looking at the teams that each brand is fielding, they’re relatively evenly matched with each team having their own weak links and star players.

The night will begin with a preliminary match between Craig Jones and Fredson Paixao. Though the Quintet rules ban heelhooks, Craig Jones boasts a formidable leglock game and a growing love for front-headlock attacks that may prove difficult for seasoned wristlocker Fredson Paixao. Coming off a fantastic ADCC run and a slick victory over Adam Wardzinski at Grapplefest 7, Craig Jones should be far too much for Paixao to handle.

Two more matchups will feature after the Quintet Ultra semi-final matches. MMA veteran face off against a high-level BJJ athlete. Firstly, Team Alpha Male fighter Cynthia Calvillo, fresh off a performance on UFC on ESPN 7, will take on Renzo Gracie brown belt Danielle Kelly. Calvillo has some submission wins on her record and performs well in MMA but in a strictly grappling ruleset, Kelly’s jiu-jitsu skills should be too difficult to overcome.

The final singles match will find Gordon Ryan taking on the master of the Ezekiel Choke, Aleksei Oleinik. Oleinik has an incredible record of 45 submission victories in MMA but he’s never faced someone anywhere near Ryan’s skill level on the ground. There’s always the chance that Oleinik manages to pull off a stunning upset with a shock Ezekiel choke but realistically, Ryan should coast to a comfortable victory here.

The main event is stacked with MMA legends and quite a few wildcards. Each team has at least one strong contender like the UFC’s Gilbert Burns, Pride’s Gregor Gracie, WEC’s James Krause and Strikeforce’s Jake Shields. The team’s overall performances will really hinge on their star-players. If someone like Jake Shields can take out two or three members of the opposing team then that builds up a comfortable lead for their team.

Shields and Burns are probably the best grapplers in the competition, but WEC look like the strongest all-round team. With Chad Mendes’ non-stop cardio and great wrestling, Glover Teixeira’s vastly underrated top-game and James Krause solid skills in any area, they have the best chance of having solid team performances.

Despite WEC being the favourites to win, one great performance from any of the other team’s key players will blow the tournament wide open.

Quintet Ultra will be held at Red Rocks Casino in Las Vegas, Nevada and you can purchase tickets here.

Alternatively, the event will stream live on UFC Fightpass on December 12 at 10PM ET.