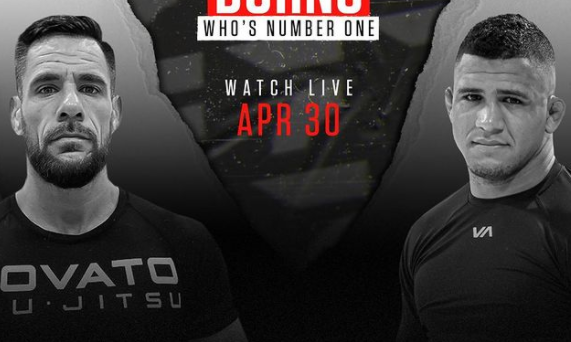 A pair of elite combat sports athletes are scheduled to compete at the next Who’s Number One (WNO) event. On April 30, Rafael Lovato Jr. and Gilbert Burns will square off in an interesting submission-only match that’s sure to captivate fans of MMA and jiu-jitsu.

News of the booking was reported by FloGrappling.

What makes this match-up so interesting is that both athletes have realized ample success in gi jiu-jitsu, no-gi jiu-jitsu, and MMA.

Rafael Lovato Jr. was an IBJJF black belt world champion in 2007 and a no-gi world champion in 2010. He began his professional MMA career in 2014 and quickly racked up victories on his way to a perfect 10-0 record and the Bellator MMA middleweight championship. Shortly after winning that title in 2019, though, Lovato was forced to retire from MMA due to health concerns. He is now refocusing his efforts on jiu-jitsu, competing in IBJJF tournaments and Fight to Win, with a recent win over Gabriel Almeida.

Like Lovato, Gilbert Burns was a black belt gi and no-gi world champion. Also like Lovato, he has led a successful MMA career. Burns made his UFC debut in 2014 and has been with the promotion ever since. He last fought in February 2021, losing a welterweight title fight to Kamaru Usman. Although Burns has been away from jiu-jitsu since 2019, he has competed occasionally throughout his UFC tenure; his last match was a submission loss to Craig Jones in 2019.

Lovato vs. Burns will take place on the April 30 WNO card headlined by Craig Jones and Tye Ruotolo.