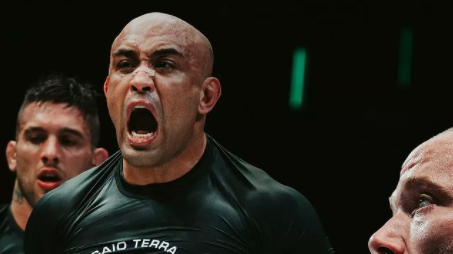 On Sunday, November 14, Raw Grappling Championships held its inaugural event, live from London. The card was filled with elite talent from around the world, and featured an eight-man, submission-only grand prix, as well as a pair of superfights.

The grand prix saw ADCC champion Yuri Simoes impose his top game against all three of his opponents on his way to the tournament crown.

In the first round, Simoes used a steady diet of guard passes and attacks from dominant position to nullify the leg locks of Jed Hue during the 12-minute submission-only regulation period. In the points-based overtime period, Simoes again passed Hue’s guard to secure a 3-0 victory. And in the semifinals, Simoes was able to implement a similar strategy against Taylor Pearlman, imposing his top game during the regulation period before scoring a beautiful guard pass and points victory in overtime.

With the win, Simoes advanced to the finals where he would square off with GF Team’s Patrick Gaudio.

Once again, Simoes leaned on his world-class top game. Through much of the regulation period, Simoes and Gaudio grappled for position on the feet. When Gaudio eventually pulled guard, Simoes was able to pass guard and generally keep Gaudio on the defensive. After a 12-minute regulation period and a scoreless two minutes of overtime, Simoes was awarded the decision.

In superfight action, Lucas “Hulk” Barbosa kept to his winning ways, making relatively quick work of Gerard Labinski. Barbosa used heavy pressure passing to move to mount, then to a classic armbar to secure the tap in just over seven minutes.

Finally, Rafael Lovato Jr. and Adam Wardzinski largely nullified each other through 15 minutes of action, with Lovato’s pressure passing going head to head with Wardzinski’s butterfly and single leg-x guard. In the points-based overtime period, Wardzinksi pulled guard without contact, prompting the penalty point that would ultimately hand Lovato the victory.

View the full Raw Grappling 1 results and highlights below: