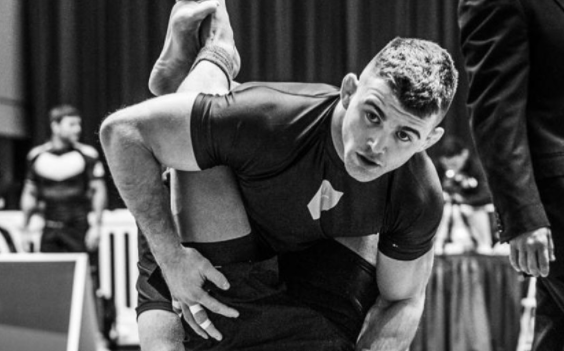 Dante Leon spoke to Grappling Insider in detail about his upcoming Who’s Number One match against Mica Galvao.

On Friday, March 25, no-gi world champion and ADCC fourth-place finisher Dante Leon will take on 18-year old jiu-jitsu phenom Mica Galvao in the co-main event of Who’s Number One (WNO). While Galvao is still a relatively fresh face on the elite competition scene, Leon is already an established player at the highest levels of no-gi grappling.

A black belt since 2017, Leon is one of the sport’s most consistent and active competitors. That consistency makes sense, given Leon’s notoriously strict training regimen.

Indeed, Leon recently defeated Mateusz Szczecinski at Grapplefest 11 — his fourth time competing for the Liverpool-based promotion. Per usual, Leon maintained his training schedule throughout his travels, never missing a session on the mat or in the weight room.

“I’ve been a big person on never missing sessions regardless of the time of year… The fight game doesn’t slow down, there’s always matches coming up on the horizon.”

Leon’s next match on the horizon is against Galvao. Since bursting onto the North American competition scene in 2021, the teen-aged Galvao has solidified himself as one of the most dangerous grapplers in the world. He placed second at the WNO championships, and in the past year alone, Galvao holds wins over Oliver Taza, Jacob Couch, and Levi Jones-Leary (in the gi). Recently, Galvao impressed at the ADCC South American Trials where he submitted all of his opponents to capture gold.

Leon recognizes and respects what Galvao brings to the table. He is also highly analytical, and sees a path to victory.

I approach the match the way I would approach any other match, in a lot of aspects. Given his strengths, there are some things that I have to take note of and I have to be aware of… He’s very counter-oriented, which means that he’ll sit back a lot and he’ll look to jump into certain positions where he sees openings… I usually see him have success against opponents who are sitting back, and usually when people push the pace on him, it really starts to slow down his attacking sequences and his game.

It’s tough to say what is going to be the thing that is going to the hardest to deal with him because he’s very unorthodox and he has a very complete game. He’s good on the feet, he’s got a great guard. But I think the thing that people overlook the most is his flexibility. I think his flexibility is his probably his biggest attribute. I know he’s strong, I know he’s explosive, but I look at his flexibility as being the thing that could give me the most problems. He’s able to wedge his way into certain positions that somebody of his stature shouldn’t be able to. He’s able to retain guard very well and from there jump into submissions and attacks. His flexibility is something that people overlook quite often I think that’s his biggest attribute.

As far as me, I just need to be disciplined. There can’t be any bulls***. There cant’ be any loose elbows, lapse in focus, any lapse in timing. I have to be tight, I have to be focused, and I have to be ready to do it for 15 minutes.

In breaking down Galvao and what he does best, Leon is faced with a dilemma. Galvao does his best work on the counter, but his opponents often find success pushing the pace, which necessarily exposes them to a counter-submission from Galvao.

How, then, does Leon simultaneously push the pace against Galvao and avoid his dangerous counter game?

“You just gotta be ready to face the fire is what I’ve been saying… You’re gonna get in some positions where [things] are a little bit hairy, a little bit tricky, where if you’re not making the right moves and you’re not disciplined and trusting in your position, then you can get in trouble. The way to combat that and not fall victim to that is to be disciplined and to trust in your positioning. The biggest challenge with that is anybody can do it for four, five, six, 10 minutes even, but it’s 15 minutes. He’s somebody that has the cardio and jiu-jitsu to be dangerous for 15 minutes straight so that’s something you have to look out for.”

Leon is well aware of how costly a single mistake can be against Galvao can be. At the WNO championships, Galvao submitted Leon’s now-teammate Jacob Couch, latching on to an arm early when given the smallest of openings.

“If he gets an underhook, or if he gets a good bite on the arm, or a tight grip on the front headlock… he just needs one look at something and it could be game over,” Leon said. “It’s very rare that you see someone get out of a fully locked submission of his or just a point of control, like his triangle or his front headlock. It’s very rare that you see somebody escape it. It’s almost done once you get there.”

But as dangerous and as hyped as Galvao may be, Leon is confident in his preparation and abilities. He speaks with the confidence — not arrogance — of someone that has not missed a training session in years, of an ADCC veteran, of a grappler that has been competing at the highest levels against the biggest names for years.

“Against Mica, I think I’m gonna submit him,” he said. “I can’t say when, I can’t say how, but that’s my goal. That’s my vision, that’s what I’ve worked tirelessly to do… However it needs to get done, I’m prepared to do it. Whatever needs to be sacrificed, I’m prepared to do it… I’m not gonna walk away from that match with any other result and be satisfied. That’s the result I want and if you ask me that’s the result I’ll have.”

How to watch: Who’s Number One takes place on Friday, March 25 and will air live on FloGrappling (subscription required).