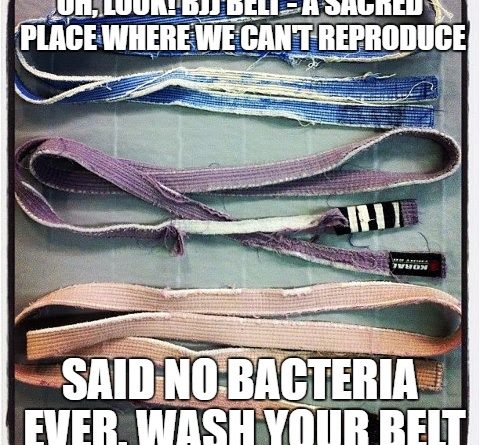 You would think that since the news got announced sometime early 2020 about the Coronavirus outbreak that people would be more health conscious about viruses wouldn’t you? Well BJJ fighters I’ve got news for you – you also need to wash your belt as well as your Gi. You would think that it would be common knowledge, and would go without saying that you need to wash your sports gear that you sweat on and mingle with other people with – but for whatever reason, a lot of BJJ practitioners don’t wash their belts. Your belt will carry whatever your Gi has picked up, and likewise will also pass on to your training partners.

Why Do Some People Not Wash Their Belts?

It’s vital that you wash your gi, and your belt, after every session. There’s an old myth in the world of traditional martial arts that washing your belt washes out your knowledge, power and skills. The tale goes that the original martial artists had just one belt, a white one, and during the years of training, dirt, stains, sweat, blood etc would gather onto the belt. As they accumulated, the belt would turn darker and darker, eventually becoming black. Ranked belts are a comparatively new invention and for a long time there were only white belts for students and black belts for instructors. While there is a romantic notion behind wearing a white belt until it turns black, there are plenty more hygienic reasons not to do so.

I understand the sentimental value of belts, they’re given to us by our masters and symbolize years of effort and dedication. That, however, does not exempt them from basic hygienic rules!

Good Hygiene is Imperative When it Comes to BJJ

Hygiene plays a huge part in every sport, even more so in martial arts. In terms of grappling martial arts, like Jiu-Jitsu, hygiene is of the utmost importance. Bad hygiene can shut down a whole school and/or keep people off the mats for months. The constant contact and proximity of grapplers, along with rolling around on the ground in humidity create the perfect conditions for microorganism growth. And where there are bugs, there are potential infections looming.

There’s a plethora of skin and bacterial infections you’re opening yourself up to when training BJJ such as; staph, ringworm and scabies to mention a few. These pesky little critters can survive on your belt, or the mats, for months. It’s a Petri dish you’re tying around your waist every time you train! A dirty belt gets around everywhere, disseminating its contents along the mat surface. Before you know it, you’re face deep into everything that lives on a “wise” unwashed belt. The dreaded deadly ‘staph’ is caused by a bacteria called Staphylococcus Aureus (one of the biggest mat-born illnesses) which can actually kill you. If you’re not squeamish and don’t know what ‘Staph’ is then google ‘Kevin Randleman Staph’ and you will get some answers.

Don’t take unnecessary risks, wash your belts! Would you go to class without washing your Gi or your rashguard? No you probably wouldn’t and if you would – that’s disgusting – stop it. Fix that. Wash your stuff. Your belt is no different. When doing a sport like BJJ you not only need to take into consideration your own personal hygiene, but the health of your training partners too. Sanitize your belts!

It is important to wash your entire uniform not just the jacket and pants, but the belt as well. The belt gets just as dirty as the rest of the uniform; containing all of the bacteria, fungus and mites as your uniform does when worn. You should wash your spats, shorts, rashguard, gi and belt after every session – and your gumshield should be kept clean too!

You can reapply your stripes – it’s sports tape. Tape also picks up grime bacteria and fungus too so there’s no harm in a stripe coming off in the wash and re applying it yourself. If it comes off, it comes off – it’s replaceable.

Below is a good in-depth video from experienced retired MMA fighter Ramsey Dewey as to why you should wash your belt and the importance of it.

BJJ belts tend to collect little bits and pieces as you roll. Bacteria, fungi, viruses and other disease-causing agents can find fruitful soil in the grooves of your belt. Despite posing a threat to your own health, you are now a means of transport for those bugs to get on other people. And, although you might not catch anything, someone else will.

You may think ‘I haven’t had any problems with it’ (not washing your belt) – not yet – but you will. If you train long enough, you will be exposed to mat-born illnesses, you won’t like them, and you won’t want to give them to anybody else. Wash your god-damn belts!

Do not rely on the internet for medical advice. If you think there is something wrong with your skin but aren’t sure what it is, get it checked out, and follow the instructions that your doctor gives you.