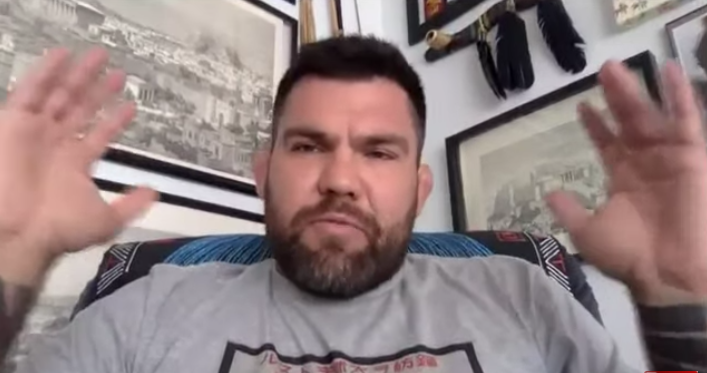 Earlier this year, Gordon Ryan and ADCC organizer Mo Jassim alleged that Robert Drysdale engaged in at least one fixed match on his way to winning the 2007 ADCC absolute title. Drysdale initially denied those allegations, and in an appearance on the Aces BJJ Podcast, Drysdale explained in detail the nature of his conflicts with Gordon Ryan and Mo Jassim, and directly addressed the allegations of a fixed match against Andre Galvao.

On the nature of his conflict with Gordon Ryan:

According to Drysdale, Ryan asked for a match with Drysdale when Ryan was a purple belt. Drysdale declined, saying that he didn’t know who Ryan was, which started the years-long back and forth between the two.

“This is an ongoing thing. The topics, they change, but the target remains. I think it’s somewhat personal, is the only thing I can think of. I’ve lost count of how many times Gordon has come after me. In his defense, I came after him once. I think we’ve engaged nine times. Out of those nine times, one of them was started by me and I regret it. And I shouldn’t have done that. And I initiated it. Every other time he came after me. In fact he was a purple belt when he started coming after me… I don’t know. I think he has psychological issues, some kind of complex of superiority… He has to discredit everyone under the sun… It has to be something personal, because it’s reoccurring, it’s an old thing.

It started when he was a purple belt. He called me out to fight me… That was when it started.”

On the nature of his conflict with ADCC organizer Mo Jassim:

Drysdale says that after the 2019 ADCC, he reached out to Jassim with suggested changes to the event, which Jassim took personally.

“From an organizational standpoint, there were some major problems. And I pointed out some of these problems to Mo not in a condescending way, but more in constructive criticism. I think he took it personally… I think on the other end, he might have received that as me being condescending in some way.

He went after me personally, so I knew there was a grudge there.”

On whether his 2007 ADCC match against then-teammate Andre Galvao was fixed:

“I have never organized, orchestrated, requested, suggested, or needed a fixed fight in my life… If I had a time machine… there’s nothing to do different… I didn’t need or suggest a fixed fights. That’s an easy one to tackle…

“To say that he threw a match because he was my teammate, pause. He was warming up Jacare [Souza] in 2009. He was giving him advice on how to beat me. He was coaching him through the match… I cannot speak for him. Is anyone surprised he’s trying to protect his reputation?… You can say whatever you want. Don’t throw me in there acting like I’m part of it because he knows perfectly well that I’m not.”

On splitting the ADCC prize money with Galvao:

We did split the money, but that was something we had agreed on before the event… These things have always happened. That part is true… That was already an arrangement. If you don’t know this, almost everyone was doing that, by the way. It was very, very common — teammates split the money.”

Ben Coate has 671 posts and counting. See all posts by Ben Coate