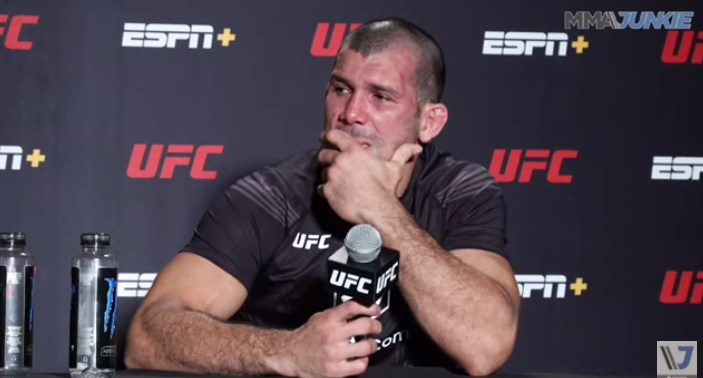 At UFC Fight Night: Makhachev vs. Moises, jiu-jitsu world champion Rodolfo Vieira bounced back from his first career MMA loss with a third-round submission win over Dustin Stoltzfus. Following the win, an emotional Vieira broke down in tears as he described what the victory meant to him.

“I’m definitely emotional for the victory,” Vieira said through a translator. “I thought about my son. He’s very young; he’s one year old. Last time I lost, this time I promised myself I would give the victory to him. This is what was on my mind the whole time. Also my grandma, she passed a year ago and I’m sure wherever she is right now, she’s happy for my victory, my performance. I dedicate my victory to my son and my grandma.”

An ADCC champion and four-time IBJJF world champion, Vieira might be the best jiu-jitsu player currently competing in MMA. In February 2021, he suffered a stunning submission loss to Anthony Hernandez, dropping his MMA record to 7-1.

In the bout against Stoltzfus, Vieira surprised fans and media by not immediately bringing the fight to the mat. Through the first two rounds, the grappling specialist showed off an improved jab and overall striking. In the third round, he jumped on the opportunity to grapple, quickly choking out Stoltzfus with a rear-naked choke.

Vieira is not currently booked for another bout, but he indicated he wants to fight once more before the end of the year.