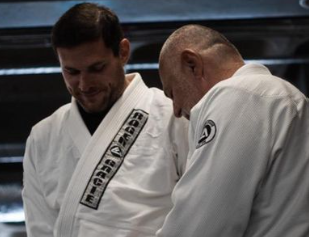 Roger Gracie is the grandson of the founder of Brazilian Jiu-Jitsu, Carlos Gracie and is the son of Reila Gracie (daughter of Carlos Gracie) and Mauricio Motta Gomes, he was recently awarded his 5th degree on his black belt from his father on July 25, 2022. Gomes is a eighth degree white and red belt.

What does it take to become a 5th Degree Black Belt?

The IBJJF requires a practitioner to practice and teach at the black belt level for a minimum of three years before progressing to the next rank for the first 3 ranks. Ranks 4, 5, and 6 require 5 years from the previous rank.

An Unsubmittable Trailblazer in the Sport

Roger Gracie earnt his black belt back in 2004 off his uncle Carlos Gracie Jr and went on to become a x10 world champion. Gracie has 10 wins at the IBJJF World Jiu-Jitsu Championships as a black belt, with three of those victories in Open Weight competition; he is regarded by many BJJ fans as the greatest competitor of all time.

Just one year after getting his black belt, In 2005 Roger competed at ADCC and won all eight of his matches both at the super heavyweight and absolute weight classes by submission. Roger has not been submitted in competition since he was a blue belt.

Roger Gracies grappling record stands at 76 wins, 7 losses. 62 of those 76 wins came via submission and his losses are from points and advantages. Gracie truly was an unsubmittable trailblazer in the sport.

Lucy Wynne has 132 posts and counting. See all posts by Lucy Wynne