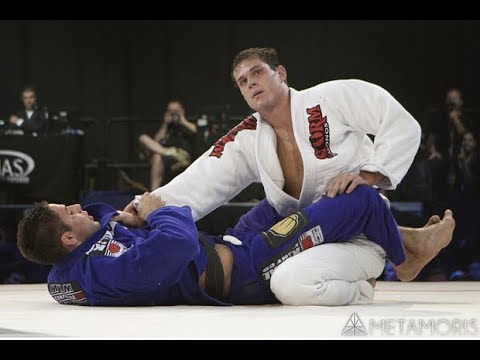 Roger Gracie is widely considered the best jiu-jitsu player of all time — an opinion that’s even held by Gordon Ryan’s coach, John Danaher. So when he speaks, we listen. On a recent episode of the BJJ Fanatics podcast, Gracie touched on a number of technical topics ranging from the mount and escaping mount, drilling techniques, positional sparring, and the closed guard. Gracie’s closed guard might be the best in the history of jiu-jitsu, so it makes sense that he has some insight on the best way to open the closed guard.

“I think the most efficient way to open people’s guard is to stand up in a solid base and just push the knee down…” said Gracie. “For me, there’s no comparison with any other types of opening the guard apart from standing up. The strongest way to open people’s guard is standing up, solid base. Of course they will try to get your legs. Sometimes you end up falling but then you just try to fall in a way that you don’t get swept.”

According to Gracie, the reason he prefers to stand up to open the closed guard is a matter of physics. On the mat, it’s a battle of the top man’s arms against the bottom man’s legs. But once the top man stands up, the bottom man now has to use his leg strength to fight against gravity.

“Closed guard is the arms fighting against the legs. So you have to create a angle that suddenly you are able to overpower the legs with your arms. As long as you are on your knees, the legs will be way stronger than the arms. The moment you stand up, the legs will be weaker… I have a pretty strong closed guard, and if you don’t stand up, I don’t think anyone can open my guard. I’m not gonna say it’s impossible but it’s extremely difficult… It doesn’t matter which angle you put yourself in, I can move with you… If you stand up, I cannot move, I’m hanging, so I’m just there. I don’t have the movement to change any angles. I’m there, and gravity is pulling me down… My attacks come when you’re kneeling down… If I don’t stand up, I cannot open people’s guard. It’s as simple as that.”

Roger Gracie’s accomplishments in jiu-jitsu are far too many to list here. He is an ADCC weight and absolute champion (submitting all eight of his opponents) and a 10-time IBJJF world champion. He has not competed since he came out of retirement in 2017 to face Marcus “Buchecha” Almeida, who he submitted.