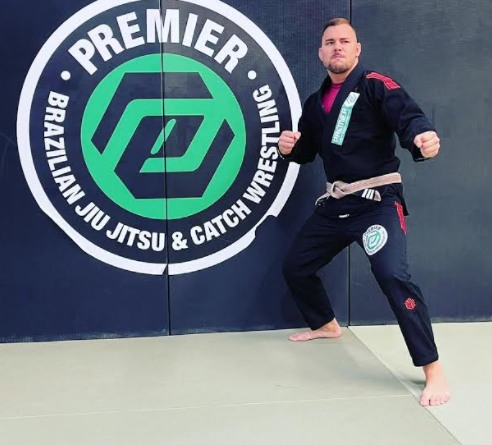 Sean Flynn, (@championofchampions on Instagram) is a BJJ Brown Belt from Watford, England who has been training jiu jitsu for 14 years, starting at the Roger Gracie Academy in London, now training at Premier BJJ in Harrow under Chris Foran. Recently on 25th July, Flynn decided to challenge himself with an event called ‘Roll 66’ (a take on Route 66) where he does 66 x 5 minute rounds, one after the other, fresh people each time, ranked Blue up to Black Belt, Gi and No-Gi. Every 11 rounds Flynn gets a five minute break, so it basically works out as a 55 minute shark tank round, but six times over. The gruelling challenge is also in aid of an amazing cause, a charity called Tommys which is the largest charity in the UK carrying out research into the causes of miscarriage, stillbirth and premature births. Although Flynn has completed the event, the fundraiser is still open, so if you would like to donate click here.

The inspiration of the self-set challenge came from reading a book called ‘You Can’t Hurt Me’ by David Goggins. Flynn describes the book, and expands on the relation between this book and the challenge, “It’s basically about being uncommon amongst uncommon people and pushing your mental and physical abilities. I’ve decided that I’m 31 now coming up to 32 and I have sort of just been in third gear and I haven’t really pushed the pace. I haven’t been doing enough. I definitely have the skill set and the physicality to do it and I just wanted to push myself with something extreme. I love jiu jitsu so I thought let’s do something involving jiu jitsu. What basically is going to make people think he’s a crazy motherf*cker? I thought I can’t spar for 24 hours because I will die, so basically what I did was, I thought of a timeframe where I thought most people will think to themselves I could never do that. It is enough to push me mentally and physically. I’ve trained and sparred for probably two hours in the past, so people will think six hours what the fuck? I thought, six hours? I would probably survive it.”

Through researching charities to raise money for, and looking into Tommy’s, Sean found out that, “1 in 4 babies don’t make it through pregnancy, through all sorts of issues. My son is three years old and his name is Tommy as well and I thought I’m super lucky to have him, and my Mrs had a smooth pregnancy, and he’s just a blessing to us. I just thought of all the families that maybe didn’t end up having a child for whatever reason and all the heartbreak that would cause, so yeah, it was quite poignant for me that it was called Tommys as well. I did the last 66th round with my son.”

Some may think that they would be able to smash this challenge, others (realists) know the intensity of the challenge and would rather watch someone do it, than be the one doing it. Fresh people every round as well, means that very few will go ‘easy’. So… how did Sean get on?

“I’ve been training super hard and I knew this would be the biggest physical challenge of my life. I kept a decent pace and I expected to cruise at like 30% – I’m not going to lie, but everyone was not having that and wanted their moment to tap me. It was like a competition for three and a half hours. Some slowed down a little bit because they were well aware of the situation but I would say the majority did not.”

“I’ll be as honest as possible – I nearly shit myself”

Flynn continues, “There was a couple of moments where I exploded into action again but there was a moment in the fourth hour where I couldn’t walk and I was eating so much glucose gels, and lucozade sports, I’ll be frank with you I nearly threw up a couple of times and I’ll be as honest as possible – I nearly shit myself. Because I was carb loading like three days before. I was eating everything so it was tough, my stomach was not having a good time.”

A gruelling feat of strong mental and physical wellbeing finishing off with an emotional moment having the last roll with his son: Flynn has been teaching his son to wrestle since he was one and is three in a few weeks. Amongst family there were also spectators and teammates supporting Flynn on this beast of a challenge as well as his students.

“My brother who doesn’t train himself, and one of my students, because I teach as well, stayed there for the whole six hours, and they were sort of my helpers. If I was in top side controI I’d say water and they’d give me a quick sip of water and I’d throw it back to them, when I had that five minutes off they were fanning me down, taping my toes. My toes are ruined, absolutely ruined, they’re like bacon flaps. That’s probably the worst thing about it, my toes. My toes are in absolute bits.”

The event was live-streamed on Facebook and Twitch, but due to a network issue in the first hour or two, the whole event was unable to be fully captured; however Sean did manage to get the last four hours on film. So far, Sean has raised an amazing £2.5k for Tommy’s but he is leaving donations open for a few more weeks to gain more funds and exposure for the charity. To donate click here, and to follow Sean Flynn click here.