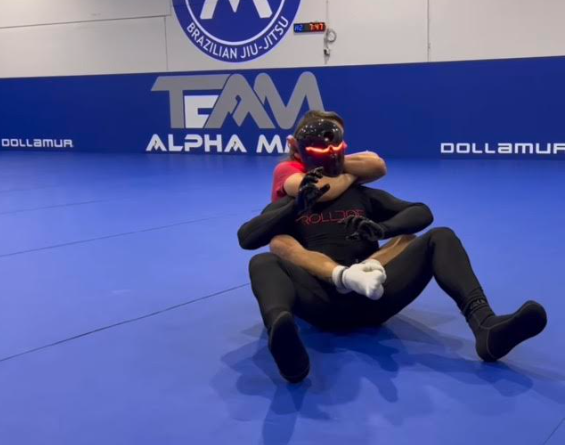 At first glance it might look a bit like the rubber man from the American Horror Story Murder House series, but it is actually an (equally as scary?) AI BJJ dummy. This high-tech BJJ dummy reacts like a human to submission attempts, its joints break and dislocate like a real body and the robot can be put to sleep with chokes when there is the correct pressure applied to the carotid arteries.

Scary or impressive? We shall let you decide…

The rollbot was originally designed for UFC commentator, comedian and BJJ black belt Joe Rogan after he was heard talking about the ideal grappling dummy on his podcast, ‘The Joe Rogan Experience’. The inventor is a man called Sam Hon.

In responses to comments on their instagram page, a user asked if the robot knows when you stop a submission, and can it sense and understand a physical and verbal tap? Rollbot responded “For elbow, knee and ankle submissions you will feel it. I’m posting a video shortly that shows what’s going on underneath the surface. It has sensors in the neck that will let you know how much pressure you are putting on the carotid arteries. It has a speaker in the head that will play specific sounds accordingly.”

Can the rollbot submit me?

Another user asked the all important question, “does it fight back?”, to which they responded: “It stays defensively responsible. I put a ballast inside its hips so it’s always trying to sit up and roll to a side. Its spine is also curved down so it can’t lay flat on its own. Feel like it’s almost trying to shrimp away. You will have to roll with it to really experience it.”

As for when it comes out? The release date for the rollbot is unknown, but the website will be launching in the upcoming months which should provide more information for anyone interested in purchasing this extremely advanced grappling dummy.

A few peope have had the chance to try out different (older) versions of the rollbot, but BJJ black belt under Gustavo Machado, Samson Sausser was fortunate enough to give the latest rollbot a trial, watch the video by clicking here