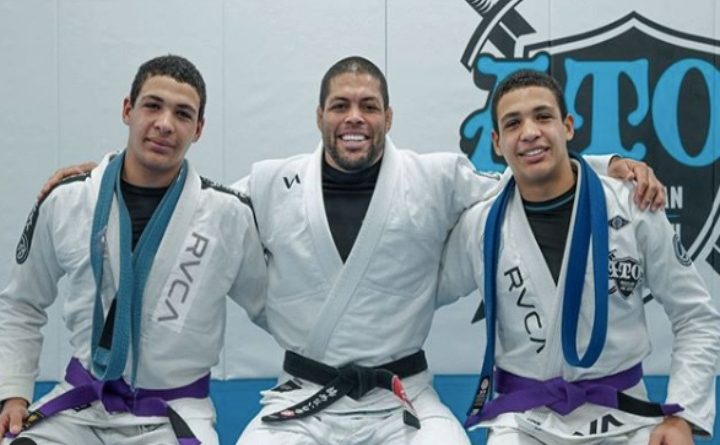 The Ruotolo twins are right in the middle of transitioning from prospects to full-fledged competitors and the secret is finally out. Both Tye and Kade Ruotolo were promoted to purple belt at the age of sixteen, just the other day by Andre Galvao. This comes after a fantastic competitive year for Tye Ruotolo where he broke into the adult scene with a great run at ADCC 2019, taking victories over seasoned competitors like Bruno Frazatto. He made it all the way to the semi-final to give the legendary Paulo Miyao his biggest test of the tournament with a deep kneebar attempt late on his way to decision loss.

Tye Ruotolo also managed to beat one of BJJ’s most ruthless competitors in Vagner Rocha at Fight 2 Win. While this is the first we’ve seen of either of the them against elite competitors, both of the Ruotolo twins have already won literally everything there is to win in the juvenile divisions, no surprise when you learn that they’ve been training since they were three years-old.

Purple Belt Promotion ???????? 2019 was definitely one of our biggest years of growth in Jiu Jitsu. At our first year of competing at juvenile, we won gold at all of the big tournaments that we had entered. Europeans, Pans and Worlds. We also created opportunities to test our skills in some of the biggest competitions in submission grappling, with ADCC being the most memorable and starting the momentum. The experiences of traveling, winning, losing, learning, training, meeting new people is all part of this life and we are stoked to be where we are.

Thank you Professor Andre and Professor Angelica for creating such an amazing place to train. We love our team. We are also grateful for all of our sponsors, family and friends for the support we have had throughout the years. We are really looking forward to 2020 ???????? Happy New Year.